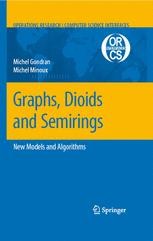 The origins of Graph Theory date back to Euler (1736) with the solution of the celebrated 'Koenigsberg Bridges Problem'; and to Hamilton with the famous 'Trip around the World' game (1859), stating for the first time a problem which, in its most recent version – the 'Traveling Salesman Problem' -, is still the subject of active research. Yet, it has been during the last fifty years or so—with the rise of the electronic computers—that Graph theory has become an indispensable discipline in terms of the number and importance of its applications across the Applied Sciences. Graph theory has been especially central to Theoretical and Algorithmic Computer Science, and Automatic Control, Systems Optimization, Economy and Operations Research, Data Analysis in the Engineering Sciences. Close connections between graphs and algebraic structures have been widely used in the analysis and implementation of efficient algorithms for many problems, for example: transportation network optimization, telecommunication network optimization and planning, optimization in scheduling and production systems, etc.

The primary objectives of GRAPHS, DIOÏDS AND SEMIRINGS: New Models and Algorithms are to emphasize the deep relations existing between the semiring and dioïd structures with graphs and their combinatorial properties, while demonstrating the modeling and problem-solving capability and flexibility of these structures. In addition the book provides an extensive overview of the mathematical properties employed by "nonclassical" algebraic structures, which either extend usual algebra (i.e., semirings), or correspond to a new branch of algebra (i.e., dioïds), apart from the classical structures of groups, rings, and fields.

"The authors carefully explain with examples what is meant by a canonically ordered monoid, semiring and dioid, and go on to show in the book the relevance of these algebraic structures to such classic operations research problems related to graphs and networks … . recommend this as a book to be added in the libraries of institutions where graduate courses in OR are taught, because it may provide ideas for PhD students and others to explore further the concepts developed in this book … ." (R Bharath, Journal of the Operational Research Society, Vol. 60, 2009)