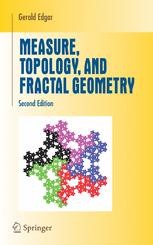 For the Second Edition of this highly regarded textbook, Gerald Edgar has made numerous additions and changes, in an attempt to provide a clearer and more focused exposition. The most important addition is an increased emphasis on the packing measure, so that now it is often treated on a par with the Hausdorff measure. The topological dimensions were rearranged for Chapter 3, so that the covering dimension is the major one, and the inductive dimensions are the variants. A "reduced cover class" notion was introduced to help in proofs for Method I or Method II measures. Research results since 1990 that affect these elementary topics have been taken into account. Some examples have been added, including Barnsley leaf and Julia set, and most of the figures have been re-drawn.

From reviews of the First Edition:

"...there has been a deluge of books, articles and television programmes about the beautiful mathematical objects, drawn by computers using recursive or iterative algorithms, which Mandelbrot christened fractals. Gerald Edgar's book is a significant addition to this deluge. Based on a course given to talented high-school students at Ohio University in 1988, it is, in fact, an advanced undergraduate textbook about the mathematics of fractal geometry, treating such topics as metric spaces, measure theory, dimension theory, and even some algebraic topology...the book also contains many good illustrations of fractals..."

"The book can be recommended to students who seriously want to know about the mathematical foundation of fractals, and to lecturers who want to illustrate a standard course in metric topology by interesting examples."

"...not only intended to fit mathematics students who wish to learn fractal geometry from its beginning but also students in computer science who are interested in the subject. [For such students] the author gives the required topics from metric topology and measure theory on an elementary level. The book is written in a very clear style and contains a lot of exercises which should be worked out."

"As a non-specialist, I found this book very helpful. It gave me a better understanding of the nature of fractals, and of the technical issues involved in the theory. I think it will be valuable as a textbook for undergraduate students in mathematics, and also for researchers wanting to learn fractal geometry from scratch. The material is well-organized and the proofs are clear; the abundance of examples is an asset for a book on measure theory and topology." (Fabio Mainardi, MathDL, February, 2008)

"This is the second edition of a well-known textbook in the field … . The book may serve as a textbook for a one-semester (advanced) undergraduate course in mathematics. … the book is also suitable for readers interested in theoretical fractal geometry coming from other disciplines (e.g. physics, computer sciences) with a basic knowledge of mathematics. The presentation of the material is appealing … and the style is clear and motivating. … the book will remain as a standard reference in the field." (José-Manuel Rey, Zentralblatt MATH, Vol. 1152, 2009)