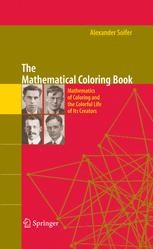 Mathematics of Coloring and the Colorful Life of its Creators

I have never encountered a book of this kind.  The best description of it I can give is that it is a mystery novel… I found it hard to stop reading before I finished (in two days) the whole text. Soifer engages the reader's attention not only mathematically, but emotionally and esthetically.  May you enjoy the book as much as I did!

You are doing great service to the community by taking care of the past, so the things are better understood in the future.

You have dug up a great deal of information – my compliments!

I have just finished reading your (second) article "in search of van der Waerden". It is a masterpiece, I could not stop reading it... Congratulations!

"Mathematical Coloring Book" will (we can hope) have a great and salutary influence on all writing on mathematics in the future.“

Just now a postman came to the door with a copy of the masterpiece of the century. I thank you and the mathematics community should thank you for years to come. You have set a standard for writing about mathematics and mathematicians that will be hard to match.

Springer has contracted his 7 books. "The Mathematical Coloring Book" is coming out in October 2008; 4 books will appear in 2009; followed by "Life and Fate: In Search of Van der Waerden", and a joint book with the late Paul Erdos “Problems of p.g.o.m. Erdos."

The author's previous books were self-published and received many positive reviews, below are excerpts from reviews of "How Does One Cut A Triangle?:

"Why am I urging you to read this? Mainly because it is such a refreshing book. Professor Soifer makes the problems fascinating, the methods of attack even more fascinating, and the whole thing is enlivened by anecdotes about the history of the problems, some of their recent solvers, and the very human reactions of the author to some beautiful mathematics. Most of all, the book has charm, somehow enhanced by his slightly eccentric English, sufficient to carry the reader forward without minding being asked to do rather a lot of work.

I am tempted to include several typical quotations but I'll restrain myself to two: From Chapter 8 "Here is an easy problem for your entertainment. Problem 8.1.2. Prove that for any parallelogram P, S(P)=5. Now we have a new problem, therefore we are alive! And the problem is this: what are all possible values of our newly introduced function S(F)? Can the function S(F) help us to classify geometry figures?"

And from an introduction by Cecil Rousseau:

‘There is a view, held by many, that mathematics books are dull. This view is not without support. It is reinforced by numerous examples at all levels, from elementary texts with page after page of mind-numbing drill to advanced books written in a relentless Theorem-Proof style. "How does one cut a triangle?" is an entirely different matter. It reads like an adventure story. In fact, it is an adventure story, complete with interesting characters, moments of exhilaration, examples of serendipity, and unanswered questions. It conveys the spirit of mathematical discovery and it celebrates the event as have mathematicians throughout history.’

And this isn't just publishers going over the top - it's all true!"

-- JOHN Baylis in The Mathematical Gazette

Soifer's work can rightly be called a "mathematical gem."

This delightful book considers and solves many problems in dividing triangles into n congruent pieces and also into similar pieces, as well as many extremal problems about placing points in convex figures. The book is primarily meant for clever high school students and college students interested in geometry, but even mature mathematicians will find a lot of new material in it. I very warmly recommend the book and hope the readers will have pleasure in thinking about the unsolved problems and will find new ones.

It is impossible to convey the spirit of the book by merely listing the problems considered or even a number of solutions. The manner of presentation and the gentle guidance toward a solution and hence to generalizations and new problems takes this elementary treatise out of the prosaic and into the stimulating realm of mathematical creativity. Not only young talented people but dedicated secondary teachers and even a few mathematical sophisticates will find this reading both pleasant and profitable.

We do not often have possibilities to look into a creative workshop of a mathematician... The beginner, who is interested in the book, not only comprehends a situation in a creative mathematical studio, not only is exposed to good mathematical taste, but also acquires elements of modern mathematical culture. And (not less important) the reader imagines the role and place of intuition and analogy in mathematical investigation; he or she fancies the meaning of generalization in modern mathematics and surprising connections between different parts of this science (that are, as one might think, far from each other) that unite them... This makes the book alive, fresh, and easily readable. Alexander Soifer has produced a good gift for the young lover of mathematics. And not only for youngsters; the book should be interesting even to professional mathematicians.

"It contains a range of combinatorial colouring problems, while those interested in the recent history or the sociology of mathematics will be entertained by lively accounts of the combinatorialists who created and worked on them. … The book is generally well written and presented, with good diagrams and layout … . a useful and engaging book." (Robin Wilson, LMS Newsletter, November, 2009)

“This book contains much math of interest and pointers to more math of interest. … This is a Fantastic Book!. … The upward closure of the union of the following people: (1) an excellent high school student, (2) a very good college math major, (3) a good grad student in math or math-related field, (4) a fair PhD in combinatories, or (5) a bad math professor. … Anyone who is interested in math or history of math. This book has plenty of both.” (William Gasarch, SIGACT News, Vol. 40 (3), 2010)

“Soifer does a fine job in collating a huge range of sources … with many interesting nuggets and, where necessary, a real determination to set the historical record straight in terms of the appellation of conjectures and theorems. … The mathematical colouring book is attractively produced and very readable. … book is likely to be of primary interest to those seeking a historically aware, up-to-date introductory survey of an engaging, and still emerging, field of combinatorial mathematics.” (Nick Lord, The Mathematical Gazette, Vol. 95 (532), March, 2011)

“This very nicely presented book, lovingly prepared by the author over a period of 18 years, studies problems involving colored objects, and the Ramsey theory that such problems are imbedded into. … recommend this book, both for mathematicians and for those who wish to learn more about mathematicians and their subject.” (Arthur T. White, Zentralblatt MATH, Vol. 1221, 2011)