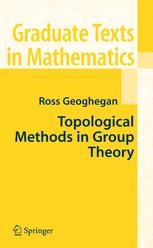 Topological Methods in Group Theory is about the interplay between algebraic topology and the theory of infinite discrete groups. The author has kept three kinds of readers in mind: graduate students who have had an introductory course in algebraic topology and who need a bridge from common knowledge to the current research literature in geometric, combinatorial and homological group theory; group theorists who would like to know more about the topological side of their subject but who have been too long away from topology; and manifold topologists, both high- and low-dimensional, since the book contains much basic material on proper homotopy and locally finite homology not easily found elsewhere.

2. Asymptotic Aspects of Infinite Groups (generalizing the classical notion of "the number of ends of a group").

To keep the length reasonable and the focus clear, it is assumed that the reader knows or can easily learn the necessary algebra (which is clearly summarized) but wants to see the topology done in detail. Apart from the introductory material, most of the mathematics presented here has not appeared in book form before.

"The author of this book has done a great service to the geometric group theory community by writing a very useful and well-written book on many topics in geometric group theory that every neophyte and researcher in the field should know. … This book is suitable as a textbook for a graduate course, with many good examples and exercises. The reviewer highly recommends this book as a basic reference book for topological methods in group theory." (John G. Ratcliffe, Mathematical Reviews, Issue 2008 j)

"This is an interesting book on the interplay between algebraic topology and the theory of infinite discrete groups written for graduate students and group theorists who need to learn more in geometric and homological group theory. … It is a beautiful text in algebraic topology, with modern topics and which points the reader towards new research directions." (Corina Mohorianu, Zentralblatt MATH, Vol. 1142, 2008)

“This book is an invaluable resource for anyone wanting a deep understanding of topics related to the ends of groups. … there is a good deal of material in this book that does not appear anywhere else in the literature. … Geoghegan’s book provides a well-presented, concrete development of geometric group theory focused on a topological approach.” (John Meier, Bulletin of the American Mathematical Society, July, 2012)