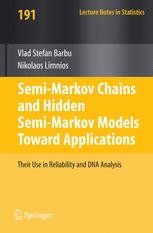 Their Use in Reliability and DNA Analysis

This book is concerned with the estimation of discrete-time semi-Markov and hidden semi-Markov processes. Semi-Markov processes are much more general and better adapted to applications than the Markov ones because sojourn times in any state can be arbitrarily distributed, as opposed to the geometrically distributed sojourn time in the Markov case. Another unique feature of the book is the use of discrete time, especially useful in some specific applications where the time scale is intrinsically discrete. The models presented in the book are specifically adapted to reliability studies and DNA analysis.

The book is mainly intended for applied probabilists and statisticians interested in semi-Markov chains theory, reliability and DNA analysis, and for theoretical oriented reliability and bioinformatics engineers. It can also serve as a text for a six month research-oriented course at a Master or PhD level. The prerequisites are a background in probability theory and finite state space Markov chains.

Vlad Stefan Barbu is associate professor in statistics at the University of Rouen, France, Laboratory of Mathematics ‘Raphaël Salem.’ His research focuses basically on stochastic processes and associated statistical problems, with a particular interest in reliability and DNA analysis. He has published several papers in the field.

Nikolaos Limnios is a professor in Applied Mathematics at the University of Technology of Compiègne. His research interest concerns stochastic processes and statistics with application to reliability. He is the co-author of the books: Semi-Markov Processes and Reliability (Birkhäuser, 2001 with G. Oprisan) and Stochastic Systems in Merging Phase Space (World Scientific, 2005, with V.S. Koroliuk).

"Overall, this is a stimulating book. As it says, the discrete-time framework has been underused in the past in the view of the fact that much real data in practice (I would even say most) is recorded in discrete time. Also, the applications listed, particularly the DNA sequencing, are important ad timely." (Martin Crowder, International Statistical Review 2009, 77, 2)

"Barbu and Limnios’s goal is to present a complete picture of the basic theory of finite state space semi-Markov processes in discrete time, describe its applications to reliability and DNA analysis, and obtain estimation results for hidden semi-Markov models (HSSM). … Each chapter contains several exercises. There are five appendices that render the book self-contained. … I highly recommend this book for applied probabilists and statisticians interested in reliability and DNA analysis, and for theoretically oriented reliability and bioinformatics engineers." (P. R. Parthasarathy, ACM Computing Reviews, March, 2009)

“…this book will be useful as  a reference for researchers interested in discrete-time semi-Markov and hidden semi-Markov processes…” (Biometrics 65, 1312, December 2009)