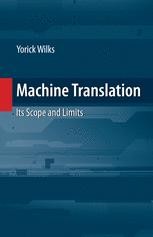 Its Scope and Limits

Machine Translation is the author’s comprehensive view of machine translation (MT) from the perspective of a participant in its history and development. The text considers MT as a fundamental part of Artificial Intelligence and the ultimate test-bed for all computational linguistics, covering historical and contemporary systems in Europe, the US and Japan.

The author describes and contrasts a range of approaches to MT’s challenges and problems, and shows the evolution of conflicting approaches to MT towards some kind of skeptical consensus on future progress. The volume includes historic papers, updated with commentaries detailing their significance both at the time of their writing and now. The book concludes with a discussion of the most recent developments in the field and prospects for the future, which have been much changed by the arrival of the World Wide Web.

Anyone interested in the progress of science and technology, particularly computer scientists and students, will find this a fascinating exploration of MT technology.

Yorick Wilks is a Professor of Computer Science at the University of Sheffield, where he directs the Institute for Language, Speech and Hearing. He received his M.A. and Ph.D. (1968) from Pembroke College, Cambridge. He has also taught or researched at Stanford, Edinburgh, Geneva, Essex and New Mexico State Universities. His interests are artificial intelligence and the computer processing of language, knowledge and belief. He is a Fellow of the European and American Societies for Artificial Intelligence, a Fellow of the EPSRC College of Computing and a member of the UK Computing Research Council.

Wilks was awarded the Antonio Zampolli prize by the European Language Resources Association in 2008. This prize is given to individuals whose work lies within the areas of Language Resources and Language Technology Evaluation with acknowledged contributions to their advancements. He was also the recipient of an ACL Life Achievement Award at the 46th Annual Meeting of the Association for Computational Linguistics in 2008.

Yorick Wilks is Professor of Artificial Intelligence at the University of Sheffield and a Senior Research Fellow at the Oxford Internet Institute. He is a Fellow of the American and European Associations for Artificial Intelligence, and a member of the UK Engineering and Physical Sciences Research Council (EPSRC) College of Computing. He is the permanent UK member of the International Committee on Computational Linguistics that runs COLING, the world’s major biennial conference. His doctorate at Cambridge was in metaphysical argument, and before Sheffield and Oxford he researched and taught at Cambridge, Stanford, Edinburgh, Essex, and New Mexico State Universities. He has worked on major Government MT projects in the EU (Eurotra) and the US (Pangloss) and was for many years a US Government consultant on the evaluation of MT systems. In 1997 a team working with his design won the Loebner Prize in New York for the best computer conversationalist of the year. He has been a founder, editor or on the Editorial Board of many journals, including the eponymous Journal of Machine Translation. He has written some seven books in the area of Artificial Intelligence and language, published by Routledge. Kluwer, Ablex, Springer and MIT and Cambridge University Presses, the most recent being "Electric Words" (MIT Press, with Louise Guthrie and Brian Slator) and "Artificial Believers" (Ablex, with Afzal Ballim). He is currently the Coordinator of the 13meuro, 4 year, 15 site, European Commission Integrated Project COMPANIONS (see http://www.nlp.shef.ac.uk/companions/) that seeks to develop intelligent, personalized, permanent, conversational interfaces to the Internet.

Wilks was awarded the Antonio Zampolli prize by the European Language Resources Association in 2008.  This prize is given to individuals whose work lies within the areas of Language Resources and Language Technology Evaluation with acknowledged contributions to their advancements.  He was also the recipient of an ACL Life Achievement Award at the 46th Annual Meeting of the Association for Computational Linguistics this year.

"Yorick Wilks, one of the most famous MT researchers, gives an interesting overview of the past, present, and future of MT; thus, the reader learns about the scope and limits of MT, justifying the subtitle of the book. … It could be useful to anyone working in the translation business and in NLP. Translators will learn about the historical context of MT, which will make it easier to understand its scope and limitations … . In conclusion, I do recommend this book." (K. Waldhör, ACM Computing Reviews, June, 2009)

“This book presents the author’s views and the culmination of his research in the field over the course of this period using his own previously published articles as a kind of roadmap through history, with additional afterwords supplementing most chapters bringing previous work into a more modern context. … if you are looking to skim a stone through MT’s history dipping into the extensive related work of this seasoned author, this book makes for an interesting and enjoyable read.”­­­ (Sara Morrissey, Machine Translation, Vol. 23, 2009)