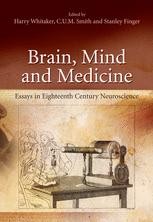 Ideas we associate with the 18th century are clearly seen in work published from the latter decades of the 17th century through the first decades of the 19th century. This is the "long 18th century", a period which exhibits multiple discourses in medicine, brain science and philosophy. The editors have deliberately adopted a "presentist" subtitle, "neuroscience", to emphasize that this collection of essays reflect a range of current thought about 18th century-studies of the nervous system in isolation and in context. There are six sections, each preceded by a short introduction.

The opening section of Brain, Mind and Medicine: Neuroscience in the 18th Century sets forth a temporal chronology for the long 18th century. This is followed by a background section of essays on (a) brain and mind in the long 18th century, (b) the role of microscopes and microscopy in this period, (c) the nature of 18th century medical education and the place of voluntary hospitals and (d) an illustration of late-18th century medicine, discussing the early career of James Parkinson as an example.

The third section contains a series of papers focusing on the nervous system, with (a) an exegesis of John Hunter’s work, (b) the contributions of William Cullen and Robert Whytt, (c) a detailed analysis of the physiological and anatomical work of Pourfour du Petit, (d) the debate between Albrecht Haller and Robert Whytt concerning the mechanism of muscle contraction and two essays on developments in animal electricity during this epoch, (e) the early history starting with observations of the electric ray, and (f) the later contributions of Luigi Galvani, medical man and scientist.

The next section opens with an essay (a) on the neuroscientific ideas of Hermann Boerhaave and Albrecht Haller, then (b) a discussion of the evolution of our understanding of strokes in this epoch; these are followed by three essays on the development and applications of medical electricity, the first (c) on the contribution of Benjamin Franklin, the second (d) on how medical electricity was discussed in the popular publication, Gentleman’s Magazine, and the third (e) on the application of medical electricity in physician’s practices. The essays continue with (f) the medical opinions of the clergyman John Wesley, followed by (g) an essay on the best example of the power of suggestion in this era, Franz Anton Mesmer’s notions of animal magnetism. The final essay in this section (h) discusses the evolution of the concept of hysteria well in advance of the well-known work of Jean Marie Charcot and Sigmund Freud.

The final three essays in the last section capture some of the cultural consequences of 18th century interest in the nervous system: (a) in the context of French materialism, (b) in Jonathan Swift’s literary treatment of brain and nervous system and, finally (c) in an analysis of the origin and development of the concept of temperament.

Cover illustration: A young woman being treated with medical electricity in the 18th century. (From Adams, 1785; see chapter by Bertucci.)

"An attempt at understanding questions of body and mind based on questions shaped by the philosophical premises of the time. … this volume provides a comprehensive set of works outlining major issues of the long 18th century and appears set to become an excellent reference book. … will have special appeal to anyone interested in the history of neuroscience, neurology, psychology, and medicine, as well as serving as a valuable resource for the contemporary neuroscientist and psychologist interested in the basis of current thinking." (Simon Boag, PsycCRITIQUES, Vol. 53 (26), 2008)

"Brain, Mind, and Medicine is well written, nicely illustrated and has its uses. It will appeal to physicians and historians of the neurosciences, and may have some use within undergraduate teaching." (Stephen Casper, History of Psychiatry, Vol. 20 (1), 2009)