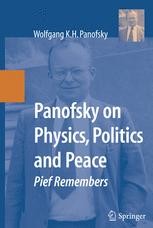 Panofsky on Physics, Politics, and Peace

Wolfgang K.H. Panofsky is a prominent physicist who has been an active contributor to elementary particle physics, accelerator building, and laboratory administration as well as to international security policy and arms control. This volume is a somewhat unorthodox memoir.

"This volume contains an unsystematic account of my past work; it is not intended to be an autobiography in the conventional meaning of the term. It is not even remotely a scholarly description of the momentous developments in which I was able to participate; rather it is a recital of memorable episodes, borrowing from the compulsory preface of facetious British history: ‘History is not what you thought. It is what you can remember.’ "

Wolfgang K.H. "Pief" Panofsky, a German-American physicist received his bachelor's degree from Princeton University in 1938 and obtained his PhD from Caltech in 1942. In the years 1945-1951, Panofsky held an assistant professorship at Berkeley, before permanently establishing himself as a Professor of Physics at Stanford. Between 1961 and 1984, he was the director of the Stanford Linear Accelerator Center.

"Panofsky on Physics, Politics and Peace is an autobiographical essay by a remarkable man. In it Wolfgang ‘Pief’ Panofsky relates highlights of his professional life: his accomplishments as a scientist, as a teacher, as the director of the Stanford Linear Accelerator Center (SLAC, the great high-energy laboratory he built), and as an adviser to those making science, technology and weapons policy at both the national and the international level." (Silvan S. Schweber, American Scientist, June, 2008)

"The worlds of high-energy physics and international security have been intimately intertwined since WW II, focusing mainly on production, control, and plans for the use of nuclear weapons. Understanding these connections is vital for anyone wishing to understand and participate in the national political scene. Much of that understanding can be obtained from this record of the life of a man … . Valuable for scientists, politicians, citizens, and security analysts. Summing Up: Recommended. General readers; lower- and upper-division undergraduates through professionals." (A. M. Saperstein, CHOICE, Vol. 45 (9), 2008)