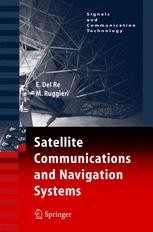 Satellite Communications and Navigation Systems publishes the proceedings of the 2006 Tyrrhenian International Workshop on Digital Communications. The book focuses on the integration of communication and navigation systems in satellites.

Enrico Del Re was born in Florence, Italy. He received the Dr. Ing. degree in electronics engineering from the University of Pisa, Pisa, Italy, in 1971.

Until 1975 he was engaged in public administration and private firms, involved in the analysis and design of the telecommunication and air traffic control equipment and space systems. Since 1975 he has been with the Department of Electronics Engineering of the University of Florence, Florence, Italy, first as a Research Assistant, then as an Associate Professor, and since 1986 as Professor. During the academic year 1987-1988 he was on leave from the University of Florence for a nine-month period of research at the European Space Research and Technology Centre of the European Space Agency, The Netherlands. His main research interest are digital signal processing, mobile and satellite communications and communication networks, on which he has published more than 300 papers, in international journals and conferences. He is the Co-editor of the book Satellite Integrated Communications Networks (North-Holland, 1988), one of the authors of the book Data Compression and Error Control Techniques with Applications (Academic, 1985) and the editor of the books Mobile and Personal Communications (Elsevier, 1995), Software Radio Technologies and Services (Springer, 2001), Satellite Personal Communications for Future-Generation Systems (Springer, 2002) and Mobile and Personal Satellite Communications 5-EMPS2002 (IIC, Italy, 2002) . He has been the Chairman of the European Project COST 227 "Integrated Space/Terrestrial Mobile Networks" (1992-95) and the EU COST Action 252 "Evolution of satellite personal communications from second to future generation systems" (1996-2000). He received the 1988/89 premium from the IEE (UK) for the paper "Multicarrier demodulator for digital satellite communication systems".

Professor Del Re is a Senior Member of the IEEE and a member of the European Association for Signal Processing (EURASIP).