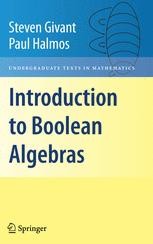 In a bold and refreshingly informal style, this exciting text steers a middle course between elementary texts emphasizing connections with philosophy, logic, and electronic circuit design, and profound treatises aimed at advanced graduate students and professional mathematicians. It is written for readers who have studied at least two years of college-level mathematics. With carefully crafted prose, lucid explanations, and illuminating insights, it guides students to some of the deeper results of Boolean algebra --- and in particular to the important interconnections with topology --- without assuming a background in algebra, topology, and set theory. The parts of those subjects that are needed to understand the material are developed within the text itself.

Highlights of the book include the normal form theorem; the homomorphism extension theorem; the isomorphism theorem for countable atomless Boolean algebras; the maximal ideal theorem; the celebrated Stone representation theorem; the existence and uniqueness theorems for canonical extensions and completions; Tarski’s isomorphism of factors theorem for countably complete Boolean algebras, and Hanf’s related counterexamples; and an extensive treatment of the algebraic-topological duality, including the duality between ideals and open sets, homomorphisms and continuous functions, subalgebras and quotient spaces, and direct products and Stone-Cech compactifications.

A special feature of the book is the large number of exercises of varying levels of difficulty, from routine problems that help readers understand the basic definitions and theorems, to intermediate problems that extend or enrich material developed in the text, to harder problems that explore important ideas either not treated in the text, or that go substantially beyond its treatment. Hints for the solutions to the harder problems are given in an appendix. A detailed solutions manual for all exercises is available for instructors who adopt the text for a course.

“This is an excellent and much-needed comprehensive undergraduate textbook on Boolean algebras.  It contains a complete and thorough introduction to the fundamental theory of Boolean algebras.  Aimed at undergraduate mathematics students, the book is, in the first author’s words, “a substantially revised version of Paul Halmos’ “Lectures on Boolean Algebras.”  It certainly achieves its stated goal of “steering a middle course between the elementary arithmetic aspects of the subject” and “the deeper mathematical aspects of the theory” of Boolean algebras.”

“The book is written for undergraduate students who already have skills in proving theorems.  However, since the proofs are so detailed and clear, it could work well as a text for a second or even first course involving substantial proofs.  For this reason, it would also make a great book for a student doing independent study.  The text is somewhat informal in the sense that sometimes proofs appear in the prose rather than under the heading, “Proof”, but it is always clear when this is being done.    Though the book starts with an introduction to Boolean rings, knowledge of group theory or rings is not a prerequisite for using the book.”

"Introduction to Boolean Algebras … is intended for advanced undergraduates. Givant (Mills College) and Halmos … using clear and precise prose, build the abstract theory of Boolean rings and algebras from scratch. … the necessary topological material is developed within the book and an appendix on set theory is included. … Includes an extensive bibliography and more than 800 exercises at all levels of difficulty. Summing Up: Highly recommended. Upper-division undergraduates, graduate students, researchers, and faculty." (S. J. Colley, Choice, Vol. 46 (10), June 2009)

“The authors have written a book for advanced undergraduates and beginning graduate students. … The authors start with the definition of Boolean rings and Boolean algebras, give examples and basic facts and compare both notions. … There are a large number of exercises of varying level of difficulty. Hints for the solutions of the harder problems are given in an appendix. A detailed solutions manual for all exercises is available for instructors. The book can serve as a basis for a variety of courses.” (Martin Weese, Zentralblatt MATH, Vol. 1168, 2009)