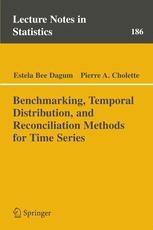 In modern economies, time series play a crucial role at all levels of activity. They are used by decision makers to plan for a better future, by governments to promote prosperity, by central banks to control inflation, by unions to bargain for higher wages, by hospital, school boards, manufacturers, builders, transportation companies, and by consumers in general.

A common misconception is that time series data originate from the direct and straightforward compilations of survey data, censuses, and administrative records. On the contrary, before publication time series are subject to statistical adjustments intended to facilitate analysis, increase efficiency, reduce bias, replace missing values, correct errors, and satisfy cross-sectional additivity constraints. Some of the most common adjustments are benchmarking, interpolation, temporal distribution, calendarization, and reconciliation.

This book discusses the statistical methods most often applied for such adjustments, ranging from ad hoc procedures to regression-based models. The latter are emphasized, because of their clarity, ease of application, and superior results. Each topic is illustrated with many real case examples. In order to facilitate understanding of their properties and limitations of the methods discussed, a real data example, the Canada Total Retail Trade Series, is followed throughout the book.

This book brings together the scattered literature on these topics and presents them using a consistent notation and a unifying view. The book will promote better procedures by large producers of time series, e.g. statistical agencies and central banks. Furthermore, knowing what adjustments are made to the data and what technique is used and how they affect the trend, the business cycles and seasonality of the series, will enable users to perform better modeling, prediction, analysis and planning.

This book will prove useful to graduate students and final year undergraduate students of time series and econometrics, as well as researchers and practitioners in government institutions and business.

Pierre A. Cholette is a Senior Methodologist of the Time Series Research Centre of the Business Survey Methodology Division at Statistics Canada, Ottawa, Canada. He is the author of BENCH, a benchmarking software widely applied by statistical agencies, Central Banks and other government institutions.

"It is an excellent reference book for people working in this area." B. Abraham for Short Book Reviews of the ISI, December 2006

"The book’s intended audience is students in graduate and final-year undergraduate courses in econometrics and time series analysis, who could use it as a textbook, as well as researchers and practitioners in governments and business, who could use it as a reference book. … This book provides a good, detailed discussion of the statistical methods used by statistical agencies for adjusting time series data from official statistics. The chapters are quite self-contained, facilitating the book’s use as a reference." (Andreas Karlsson, Technometrics, Vol. 49 (4), 2007)

"This book is a very detailed course on statistical methods for such adjustments, focused on bench marking, interpolation, temporal distribution, calendarization, and reconciliation. … Each chapter of the book is self-contained and illustrates the methods discussed with a large number of real data examples. The book can be recommended as a very useful textbook for students as well as a reference book for researchers and practitioners in this field." (Ryszard Doman, Zentralblatt MATH, Vol. 1107 (9), 2007)

"Time series play a central role in contemporary modern economics. … the authors discuss several procedures, widely used by statistical agencies, for such adjustments as benchmarking, reconciliation or balancing, temporal distribution, interpolation and calendarization. ... The clarity of exposition and the fact that each chapter is self-contained make the book easily accessible not only for experienced readers such as academic researchers or practitioners in government and business, but also for graduate or even for last-year undergraduate students." (Dan Emanuel Popovici, Mathematical Reviews, Issue 2007 e)

"This monograph, the first devoted to the interrelated topics of its title, is a distillation of its authors’ unrivaled research and practical experience at Statistics Canada in the topic areas. … Benchmarking, Temporal Distribution, and Reconciliation Methods for Time Series an essential reference for statistical institutes and central banks and for statisticians and economists who have to address similar time series data issues. … The book could serve as a textbook for a graduate-level special topics course." (Baoline Chen and David Findley, Journal of the American Statistical Association, Vol. 103 (484), December, 2008)