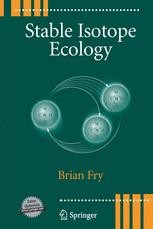 Stable isotopes are frequently used as tracers in biological systems, and their ability to track changes and processes over time has made them increasingly important to ecological research. For ecologists, stable isotopes provide a natural way to directly trace details of element cycling in the environment.

Stable Isotope Ecology provides a solid introduction to this advanced subject, and can also be used as an instructive review for more experienced researchers and professionals. The book approaches the use of isotopes from the perspective of ecological and biological research, but its concepts can be applied within other disciplines as well. In order to enable scientists to establish source-sink connections in ecological settings, Stable Isotope Ecology begins by reviewing fundamental topics of tracer fractionation and mixing. Several mini-reviews profile problems and successes encountered with isotope tracing in particular focus areas, while emphasizing the role that humans increasingly play in changing our planetary ecosphere. A novel, step-by-step spreadsheet modeling approach is also presented for circulating tracers in any ecological system, including any favorite system an ecologist might dream up while sitting at a computer. Just type in values and watch the isotope action unfold in the dynamic models.

Fry's humorous and lighthearted style painlessly imparts the principles of isotope ecology, using a unique, hands-on approach to engage students. The mechanics of fractionation and mixing are laid out in simple steps, with numerous examples and accessible mathematics (algebra only).  The book encourages students to begin their own pilot project with stable isotopes.

Dr. Brian Fry is a Professor in the Coastal Ecology Institute and the Department of Oceanography and Coastal Studies at Louisiana State University in Baton Rouge, Louisiana. His mother and father both used isotopes in their research careers, so he is a second generation isotope scientist.

"The purpose of the book . . .is to equip researchers with the essential tools of isotope research … . creates the basis for a graduate and post-graduate course in stable isotope ecology. … Fry’s understanding of the world of stable isotope ecology is impressive and extensive … . Fry does an excellent job of conveying to the reader the proper use of isotopes as they circulate within the biosphere, as well as introducing the exciting world of isotope ecology." (Zachary T. Aanderud, Ecology - The Ecological Society of America, Vol. 88 (3), 2007)

"Brian Fry who has now produced a very timely contribution of eight chapters that are designed to introduce novice graduate students to the field of stable isotope ecology.… Additional resource material is supplied...figures, color versions of cartoons, and problem sets…this would make an excellent primary textbook for a graduate course and will be enjoyed by both isoPopes and isotopeteers." (Keith A. Hobson, Quarterly Review of Biology, Vol. 82, September, 2007)