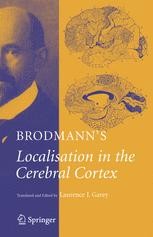 Localisation in the Cerebral Cortex

This is the third edition of the translation, by Laurence Garey, of "Vergleichende Lokalisationslehre der Grosshirnrinde" by Korbinian Brodmann, originally published by Barth-Verlag in Leipzig in 1909. It is one of the major "classics" of the neurological world. Even today it forms the basis for so-called "localisation" of function in the cerebral cortex. Brodmann's "areas" are still used to designate functional regions in the cortex, the part of the brain that brings the world that surrounds us into consciousness, and which governs our responses to the world. For example, we use "area 4" for the "motor" cortex, with which we control our muscles, "area 17" for "visual" cortex, with which we see, and so on. This nomenclature is used by neurologists and neurosurgeons in the human context, as well as by experimentalists in various animals. Indeed, Brodmann's famous "maps" of the cerebral cortex of humans, monkeys and other mammals must be among the most commonly reproduced figures in neurobiological publishing. The most famous of all is that of the human brain. There can be few textbooks of neurology, neurophysiology or neuroanatomy in which Brodmann is not cited, and his concepts pervade most research publications on systematic neurobiology.

In spite of this, few people have ever seen a copy of the 1909 monograph, and even fewer have actually read it! There had never been a complete English translation available until the first edition of the present translation of 1994, and the original book had been almost unavailable for 50 years or more, the few antiquarian copies still around commanding high prices.

As Laurence Garey, too, used Brodmann’s findings and maps in his neurobiological work, and had the good fortune to have access to a copy of the book, he decided to read the complete text and soon discovered that this was much more than just a report of laboratory findings of a turn-of-the-twentieth-century neurologist. It was an account of neurobiological thinking at that time, covering aspects of comparative neuroanatomy, neurophysiology and neuropathology, as well as giving a fascinating insight into the complex relationships between European neurologists during the momentous times when the neuron theory was still new.

Laurence Garey is a neuroscientist and professional anatomist, who has worked in brain research throughout his career, in the University of Oxford, the University of California at Berkeley, the University of Lausanne in Switzerland, Imperial College London, the National University of Singapore, and the UAE University at Al Ain. His interests have spanned the structure and development of the primate visual system and the human cerebral cortex, including morphological correlates of schizophrenia. Before embarking on a medical career, he had studied modern languages at university. He is interested in the history of neuroscience, and has translated several works from French and German, including another of Brodmann's works on anthropological aspects of brain anatomy, in collaboration with Guy Elston. He lives on the shore of Lake Geneva in Switzerland.