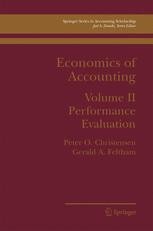 This is the second of two volumes in which the authors examine a variety of economic analyses of the decision-facilitating and decision-influencing roles of information that are pertinent to the study of the economic impact of accounting. The first volume focused on externally reported information in financial and product markets and did not model managers as economic agents – they were assumed to act in accordance with the instructions from the firm’s owners. This second volume explicitly models managers’ preferences and treats them as economic agents of the principal, who acts on behalf of the firm’s owners. Accounting reports, and other contractible information, play key roles in motivating managers through incentive contracts. This volume provides an extensive examination of fundamental concepts in the economic analysis of incentives, with particular emphasis on the impact of the performance measurement system characteristics on the value of the firm.

ECONOMICS OF ACCOUNTING: Volume II – Performance Evaluation is divided into four parts. Volume I contains Parts A through D, and the concepts developed in Part A are fundamental to both volumes. In Volume II, Part E initially focuses on optimal contracts in a single-agent /single-task/single-period setting, and explores how performance measure characteristics affect the principal’s expected payoff. Multiple performance measures (including the stock price) and multiple tasks are introduced, thereby creating settings in which the principal is concerned with both the level of incentives and the congruency of the incentives with his own preferences. Part F considers the impact of start-of-period private management information (with communication to the principal) and limited commitment in single-period settings. These analyses serve as a bridge to the multi-period models explored in Part G. These multi-period models permit exploration of the impact of inter-period consumption preferences and limited inter-period commitments on preferences with respect to the inter-period correlation and timing of performance reports. Part H concludes the book with an analysis of multi-agent contracting in settings in which agents may coordinate their actions to their mutual benefit, and may even engage in overt collusion.

Peter Christensen holds a Master’s Degree in Mathematical Economics from Aarhus University, 1983, and a Doctor’s Degree in Economics from Odense University, 1990. He has taught finance and accounting at Odense University (later University of Southern Denmark) since 1983, and he became a Professor of Management in 1991. He has published widely in Danish and leading international journals of accounting and finance. As part of his Ph.D. studies at Odense University he was a visiting Ph.D. student at the University of British Columbia in 1985-1986. This visit initiated his long-time research collaboration with Jerry Feltham, which is the basis for their two recent books: Economics of Accounting: Volume I – Information in Markets and Volume II – Performance Evaluation published currently by Springer.

Gerald (Jerry) A. Feltham became a Chartered Accountant in 1960, received his Bachelor of Commerce from the University of Saskatchewan, Canada, in 1961 and his Ph.D. in Accounting and Management Science from the University of California, Berkeley, in 1967. He taught at the University of Alberta from 1961 to 1963 before he did his Ph.D., and then taught at Stanford University from 1967 to 1971. In 1971 he became an Associate Professor at the University of British Columbia, where he became an Emeritus Professor in 2004. Jerry was an early leader in the application of information economic research to accounting. His dissertation was published by the American Accounting Association (AAA) in 1972 under the title Information Evaluation. A paper from his dissertation won the 1968 AAA Competitive Manuscript Award and his dissertation won the 1967 McKinsey Foundation Post-Doctoral Fellowship Award (for the best dissertation in the field of management in North America). Throughout his career Jerry has received many awards for his research and teaching of graduate students. These include AAA awards for a Notable Contribution to Accounting Literature, a Seminal Contribution to Accounting Literature, a Notable Contribution to Management Accounting Literature, the Wildman Medal, and Outstanding Educator. Other research awards include the Canadian Accounting Association’s Haim Falk Award for distinguished contribution to Accounting Thought, the University of British Columbia Killam Research Prize, and the Faculty of Commerce Research Excellence Award. In 2003 and 2004 he was elected to be a Fellow of the Royal Society of Canada, and to the Accounting Hall of Fame. In addition, he received the Lifetime Achievement Award from the Institute of Chartered Accountants of British Columbia and the Lifetime Contribution to Management Accounting from the Management Accounting Section of the AAA.

For many years, Jerry has taught two Ph.D. seminars on analytical research in accounting: one on information in markets and the other on performance evaluation. His lecture notes from these two courses provided the foundation for his two recent books with Peter Christensen: Economics of Accounting: Volume I – Information in Markets and Volume II – Performance Evaluation published currently by Springer.