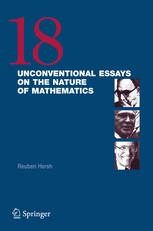 18 Unconventional Essays on the Nature of Mathematics

Advance praise for 18 Unconventional Essays on the Nature of Mathematics:

"I was pleasantly surprised to find that this book does not treat mathematics as dessicated formal logic but as a living organism, immediately recognizable to any working mathematician."

"A wonderful collection of essays on the philosophy of mathematics, some by mathematicians, others by philosophers, and all having significant things to say. Most readers will be informed, some will be infuriated, but all will be stimulated."

This startling new collection of essays edited by Reuben Hersh contains frank facts and opinions from leading mathematicians, philosophers, sociologists, cognitive scientists, and even an anthropologist. Each essay provides a challenging and thought-provoking look at recent advances in the philosophy of mathematics, demonstrating the possibilities of thinking fresh, sticking close to actual practice, and fearlessly letting go of standard shibboleths.

The following essays are included:

* William Thurston: On Proof and Progress in Mathematics

* Brian Rotman: Towards a Semiotics of Mathematics

* Donald Mackenzie: Computers and the Sociology of Mathematical Proof

* Terry Stanway: From G.H.H. and Littlewood to XML and Maple: Changing Needs and Expectations in Mathematical Knowledge Management

* Jody Azzouni: How and Why Mathematics is a Social Practice

* Gian-Carlo Rota: The Pernicious Influence of Mathematics Upon Philosophy

* Jack Schwartz: The Pernicious Influence of Mathematics on Science

* Alfonso Avila del Palacio: What is Philosophy of Mathematics Looking For?

* Andrew Pickering: Concepts and the Mangle of Practice: Constructing Quaternions

* Eduard Glas: Mathematics as Objective Knowledge and as Human Practice

* Leslie White: The Locus of Mathematical Reality: An Anthropological Footnote

REUBEN HERSH is professor emeritus at the University of New Mexico, Albuquerque. He is the recipient (with Martin Davis) of the Chauvenet Prize and (with Edgar Lorch) the Ford Prize. Hersh is the author (with Philip J. Davis) of The Mathematical Experience and Descartes' Dream, which won the National Book Award in l983, and What is Mathematics, Really?

"This is not a book about foundations or formal logic. It is … about the philosophy of mathematics, but perhaps more about the human practice of mathematics. … This is a terrific collection of essays. … all of the essays give us new insight into that curious thing we do when we do mathematics." (William J. Satzer, MathDL, January, 2006)

"The current book is destined to become a classic as well for numerous reasons which will soon become transparent. … Reuben Hersh is to be commended for orchestrating this masterful collection of essays from distinguished individuals … . I predict that this book will become a classic for the coming generations of mathematics philosophers as well as for mathematics educators interested in changing dominant conceptions of what is mathematics, finally!" (Bharath Sriraman, Zentralblatt für Didaktik der Mathematik, Vol. 38 (4), 2006)

"Editor Reuben Hersh has orchestrated a highly provocative book, particularly for mathematicians, but also for anyone interested in the philosophy and practice of mathematics. … This is a very appealing collection of essays. … I highly recommend this book to those wondering how math is carried out, both mathematicians and laymen. I also recommend it to educators interested in changing the dominant view of math and how to do math." (Hector Zenil, Computing Reviews, January, 2008)