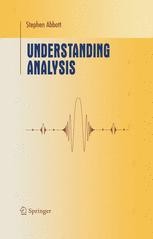 Understanding Analysis outlines an elementary, one-semester course designed to expose students to the rich rewards inherent in taking a mathematically rigorous approach to the study of functions of a real variable. The aim of a course in real analysis should be to challenge and improve mathematical intuition rather than to verify it. The philosophy of this book is to focus attention on the questions that give analysis its inherent fascination. Does the Cantor set contain any irrational numbers? Can the set of points where a function is discontinuous be arbitrary? Are derivatives continuous? Are derivatives integrable? Is an infinitely differentiable function necessarily the limit of its Taylor series? In giving these topics center stage, the hard work of a rigorous study is justified by the fact that they are inaccessible without it.

"The author has written an interesting book designed as a text for a one-semester course ... . He also expects the students to do their part by leaving to them (with copious hints) the details of many of the steps in the proofs. This enables him to cover a surprising amount of material in an attractive and stimulating manner. Students who work their way through this text will have seen a lot of interesting analysis and have developed a good understanding of the material." (R.G. Bartle, Mathematical Reviews, 2001 m)

"This is a dangerous book. Understanding Analysis is so well-written and the development of the theory so well-motivated that exposing students to it could well lead them to expect such excellence in all their textbooks. ... Understanding Analysis is perfectly titled; if your students read it that’s what’s going to happen. This terrific book will become the text of choice for the single-variable introductory analysis course; take a look at it next time you’re preparing that class." (Steve Kennedy, The Mathematical Association of America, 2001)

"This is a well-constructed text on single variable real analysis. ... students are meeting many new concepts for the first time so, from a pedagogical point of view, it is essential that the material be motivated. Abbott makes a concerted and laudable effort to do so. ... This book lives up to its title by helping the readers to develop an understanding of analysis. I wish I could say I wrote it!" (Steve Abbott, The Mathematical Gazette, 87:509, 2003)

"Understanding Analysis outlines an elementary, one-semester course designed to expose students to the rich rewards inherent in taking a mathematically rigorous approach to the study of functions of a real variable ... The philosophy of this book is to focus attention on the questions that give analysis its inherent fascination ... In giving these topics center stage, the hard work of a rigorous study is justified by the fact that they are inaccessible without it." (L'enseignement mathématique, 48:3-4, 2002)

"In writing Understanding Analysis, Stephen Abbott appreciates that modern readers may be unfamiliar with axiomatic arguments. Thus, many courses in analysis have been made easier by making them less interesting. The alternative is to make advanced topics accessible and focus on questions that give real analysis its value ... Prerequisite knowledge has been kept to a minimum: an understanding of single variable calculus. The text is written with introductory students in mind and will certainly be persuasive in establishing the value of analysis." (Nigel Steele, Times Higher Education Supplement, November 2002)

"Each chapter begins with a discussion section and ends with an epilogue. The discussion serves to motivate the content of the chapter while the epilogue points tantalisingly to more advanced topics. ... I wish I had written this book! The development of the subject follows the tried-and-true path, but the presentation is engaging and challenging. Abbott focuses attention immediately on the topics which make analysis fascinating ... and makes them accessible to an inexperienced audience." (Scott Sciffer, The Australian Mathematical Society Gazette, 29:3, 2002)

"In this book the author presents fundamental facts connected with the real functions of a real variable. ... In my opinion the didactic conception is interesting. The structure of the chapters is the following: First: discussion section (motivation, some questions or examples). Second: the fundamental text (also with some open questions) and a lot of exercises ... . Each chapter is closed by an Epilogue." (Ryszard Pawlak, Zentralblatt MATH, 966, 2001)

"This book aims to build up the elements of analysis properly – that is, with a good level of understanding ... The author’s intention was ‘to restore intellectual liveliness of the course ...’ In other words, he tries to present relatively advanced topics in an accessible way, and thus make the course interesting and worthy of effort ... This book will be useful for gifted students for supplementary reading to a basic analysis course or for students not specialising in mathematics who wish to put this material on a solid basis." (European Mathematical Society Newsletter, 42, December 2001)

"The main goal of the author is to write an elementary one-semester book that exposes students to the rich rewards inherent in taking a mathematically rigorous approach to the study of functions of a real variable. This goal is excellently completed in this textbook. ... Each chapter begins with the discussion of some motivating examples and open questions. Each section contains many exercises ... . The book is warmly recommended to students, instructors interested in the study of introductory analysis." (József Németh, Acta Scientiarum Mathematicarum, 67, 2001)

“This book is a mathematically rigorous approach to the study of functions of a real variable for student already familiar with the one variable calculus. … focuses on seven topics based on a problem. … Each of the topic begins thus with the discussion of a problem, continues with a clear mathematical development and ends with an epilogue on more advanced developments or considerations. … The book is very clear, well presented, rigorous and should be recommended to undergraduate students as a good complement.” (Yves Felix, Bulletin of the Belgian Mathematical Society, Vol. 15 (1), 2008)