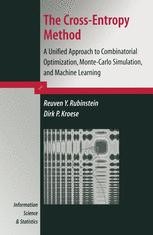 The cross-entropy (CE) method is one of the most significant developments in stochastic optimization and simulation in recent years. This book explains in detail how and why the CE method works. The CE method involves an iterative procedure where each iteration can be broken down into two phases: (a) generate a random data sample (trajectories, vectors, etc.) according to a specified mechanism; (b) update the parameters of the random mechanism based on this data in order to produce a ``better'' sample in the next iteration. The simplicity and versatility of the method is illustrated via a diverse collection of optimization and estimation problems.

The book is aimed at a broad audience of engineers, computer scientists, mathematicians, statisticians and in general anyone, theorist or practitioner, who is interested in fast simulation, including rare-event probability estimation, efficient combinatorial and continuous multi-extremal optimization, and machine learning algorithms.

Reuven Y. Rubinstein is the Milford Bohm Professor of Management at the Faculty of Industrial Engineering and Management at the Technion (Israel Institute of Technology). His primary areas of interest are stochastic modelling, applied probability, and simulation. He has written over 100 articles and has published five books. He is the pioneer of the well-known score-function and cross-entropy methods.

Dirk P. Kroese is an expert on the cross-entropy method. He has published close to 40 papers in a wide range of subjects in applied probability and simulation. He is on the editorial board of Methodology and Computing in Applied Probability and is Guest Editor of the Annals of Operations Research. He has held research and teaching positions at Princeton University and The University of Melbourne, and is currently working at the Department of Mathematics of The University of Queensland.

monograph on such a modern subject. This excellent book, on the

simulated cross-entropy method (CEM) pioneered by one of the authors

"It is a substantial contribution to stochastic optimization and more generally to the stochastic numerical methods theory." Short Book Reviews of the ISI, April 2005

"...I wholeheartedly recommend this book to anybody who is interested in stochastic optimization or simulation-based performance analysis of stochastic systems." Gazette of the Australian Mathematical Society, vol. 32 (3) 2005

"Rarely have I seen such a dense and straight to the point pedagogical monograph on such a modern subject. This excellent book, on the simulated cross-entropy method (CEM) pioneered by one of the authors (Rubinstein), is very well written..." Computing Reviews, Stochastic Programming November, 2004

"...I wholeheartedly recommend this book to anybody who is interested in stochastic optimization or simulation-based performance analysis of stochastic systems." Gazette of the Australian Mathematical Society, vol. 32 (3) 2005

"This book describes the cross-entropy method for a range of optimization problems. … It is a substantial contribution to stochastic optimization and more generally to the stochastic numerical methods theory." (V.V.Fedorov, Short Book Reviews, Vol. 25 (1), 2005)

"Since the CE method is a young and developing field, there is no book available in this area where the two authors are the pioneers. Therefore, it is quite a unique book and it may become a classic reference in the CE method literature." Technometrics, February 2005

"This book is a comprehensive introduction to the cross-entropy method which was invented in 1997 by the first author … . The book is … written for advanced undergraduate students and engineers who want to apply the method. The authors made an effort to avoid formal mathematical ‘definition-lemma-theorem-proof’ style, aiming to promote the ideas and not burden the reader with too much technical detail. My impression is that they were quite successful." (J. Zerovnik, Journal of the Operational Research Society, Vol. 57 (12), 2006)

"This book is a comprehensive review of the cross-entropy (CE) method and its various applications, in particular for rare-event simulation and combinatorial optimisation. … Each chapter is copiously illustrated by numerical examples. … we highly recommend this book to anybody curious about simulation methods, or more generally about applied probability. The principle behind the CE method is remarkably simple and intellectually appealing, and the authors do a very good job of explaining how it works, and why it works well." (Nicolas Chopin, Journal of Applied Statistics, Vol. 33 (8), 2006)

"The authors have produced a routine … that identifies cases where CE codes not perform well, and thus alerts one when other methods may be more appropriate. Having FACE available to test CE performance enhances the attractiveness of both CE and this book. … In summary, this book is a good introduction to CE for those who want to use the method, in particular, for optimization situations." (David E. Booth, Technometrics, Vol. 50 (1), 2008)

"This book is a good introduction to the cross-entropy (CE) method, an approach to combinatorial optimization and rare-event simulation based on minimizing the cross-entropy … between a sampling distribution and an unknown target distribution. It is intended to be ‘accessible to advanced undergraduate students and engineers who simply want to apply the CE method in their work, while at the same time accentuating the unifying and novel ideas behind the CE method.’" (David Bulger, Zentralblatt MATH, Vol. 1140, 2008)