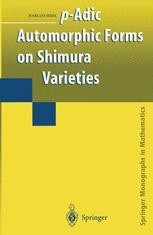 This book covers the following three topics in a manner accessible to graduate students who have an understanding of algebraic number theory and scheme theoretic algebraic geometry:

1. An elementary construction of Shimura varieties as moduli of abelian schemes.

3. A simple proof of irreducibility of the generalized Igusa tower over the Shimura variety.

The book starts with a detailed study of elliptic and Hilbert modular forms and reaches to the forefront of research of Shimura varieties associated with general classical groups. The method of constructing p-adic analytic families and the proof of irreducibility was recently discovered by the author. The area covered in this book is now a focal point of research worldwide with many far-reaching applications that have led to solutions of longstanding problems and conjectures. Specifically, the use of p-adic elliptic and Hilbert modular forms have proven essential in recent breakthroughs in number theory (for example, the proof of Fermat's Last Theorem and the Shimura-Taniyama conjecture by A. Wiles and others).

"Hida views … the study of the geometric Galois group of the Shimura tower, as a geometric reciprocity law … . general goal of the book is to incorporate Shimura’s reciprocity law in a broader scheme of integral reciprocity laws which includes Iwasawa theory in its scope. … a beautiful and very useful reference for anybody interested in the arithmetic theory of automorphic forms." (Jacques Tilouine, Mathematical Reviews, 2005e)

"The first purpose of this book is to supply the base of the construction of the Shimura variety. The second one is to introduce integrality of automorphic forms on such varieties … . The mathematics discussed here is wonderful but highly nontrivial. … The book will certainly be useful to graduate students and researchers entering this beautiful and difficult area of research." (Andrzej Dabrowski, Zentralblatt MATH, Vol. 1055, 2005)

"The purpose of this book is twofold: First to establish a p-adic deformation theory of automorphic forms on Shimura varieties; this is recent work of the author. Second, to explain some of the necessary background, in particular the theory of moduli and Shimura varieties of PEL type … . The book requires some familiarity with algebraic number theory and algebraic geometry (schemes) but is rather complete in the details. Thus, it may also serve as an introduction to Shimura varieties as well as their deformation theory." (J. Mahnkopf, Monatshefte für Mathematik, Vol. 146 (4), 2005)

"The idea is to study the ‘p-adic variation’ of automorphic forms. … This book … is a high-level exposition of the theory for automorphic forms on Shimura Varieties. It includes a discussion of the special cases of elliptic modular forms and Hilbert modular forms, so it will be a useful resource for those wanting to learn the subject. The exposition is very dense, however, and the prerequisites are extensive. Overall, this is a book I am happy to have on my shelves … ." (Fernando Q. Gouvêa, Math DL, January, 2004)

"Hida … showed that ordinary p-adic modular forms moved naturally in p-adic families. … In the book under review … Hida has returned to the geometric construction of p-adic families of ordinary forms. … Hida’s theory has had many applications in the theory of classical modular forms, and as mathematics continues to mature, this more general theory will no doubt have similarly striking applications in the theory of automorphic forms." (K. Buzzard, Jahresbericht der Deutschen Mathematiker-Vereinigung, Vol. 109 (4), 2007)