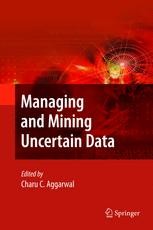 Managing and Mining Uncertain Data contains surveys by well known researchers in the field of uncertain databases. The book presents the most recent models, algorithms, and applications in the uncertain data field in a structured and concise way. This book is organized so as to cover the most important management and mining topics in the field. The idea is to make it accessible not only to researchers, but also to application-driven practitioners for solving real problems. Given the lack of structurally organized information on the new and emerging area of uncertain data, this book provides insights which are not easily accessible elsewhere.

Managing and Mining Uncertain Data is designed for a varied audience composed of professors, researchers and practitioners in industry. This book is also suitable as a reference book for advanced-level database students in computer science and engineering.

Charu C. Aggarwal obtained his B.Tech in Computer Science from IIT Kanpur in 1993 and Ph.D. from MIT in 1996. He has been a Research Staff Member at IBM since then, and has published over 120 papers in major conferences and journals in the database and data mining field. He has applied for or been granted over 65 US and International patents, and has thrice been designated Master Inventor at IBM for the commercial value of his patents. He has been granted 17 invention achievement awards by IBM for his patents. His work on real time bio-terrorist threat detection in data streams won the IBM Corporate award for Environmental Excellence in 2003. He is a recipient of the IBM Outstanding Innovation Award in 2008 for his scientific contributions to privacy technology, and a recipient of the IBM Research Division award for his contributions to stream mining for the System S project. He has served on the program committee of most major database conferences, and was program chair for the Data Mining and Knowledge Discovery Workshop, 2003, and program vice-chairs for the SIAM Conference on Data Mining 2007, ICDM Conference 2007, and the WWW Conference, 2009. He served as an associate editor of the IEEE Transactions on Data Engineering from 2004 to 2008. He is an associate editor of the ACM SIGKDD Explorations and an action editor of the Data Mining and Knowledge Discovery Journal. He is a senior member of the IEEE and a life-member of the ACM.

"The three broad areas covered in Aggarwal’s book are modeling and system design, management, and mining of uncertain data. … Aggarwal’s book is a timely publication, in that it provides a good summary of the current state of the art in the area of uncertain data modeling, management, and mining. It should be of interest to researchers and graduate students involved in the area, as well as novices who wish to become acquainted with the topic." (John Fulcher, ACM Computing Reviews, May, 2009)