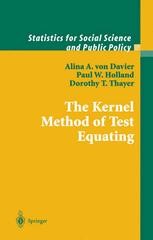 The Kernel Method of Test Equating

Kernel Equating (KE) is a powerful, modern and unified approach to test equating. It is based on a flexible family of equipercentile-like equating functions and contains the linear equating function as a special case. Any equipercentile equating method has five steps or parts. They are: 1) pre-smoothing; 2) estimation of the score-probabilities on the target population; 3) continuization; 4) computing and diagnosing the equating function; 5) computing the standard error of equating and related accuracy measures. KE brings these steps together in an organized whole rather than treating them as disparate problems.

KE exploits pre-smoothing by fitting log-linear models to score data, and incorporates it into step 5) above. KE provides new tools for diagnosing a given equating function, and for comparing two or more equating functions in order to choose between them. In this book, KE is applied to the four major equating designs and to both Chain Equating and Post-Stratification Equating for the Non-Equivalent groups with Anchor Test Design.

This book will be an important reference for several groups: (a) Statisticians and others interested in the theory behind equating methods and the use of model-based statistical methods for data smoothing in applied work; (b) Practitioners who need to equate tests—including those with these responsibilities in testing companies, state testing agencies and school districts; and (c) Instructors in psychometric and measurement programs. The authors assume some familiarity with linear and equipercentile test equating, and with matrix algebra.

Alina von Davier is an Associate Research Scientist in the Center for Statistical Theory and Practice, at Educational Testing Service. She has been a research collaborator at the Universities of Trier, Magdeburg, and Kiel, an assistant professor at the Politechnical University of Bucharest and a research scientist at the Institute for Psychology in Bucharest.

Paul Holland holds the Frederic M. Lord Chair in Measurement and Statistics at Educational Testing Service. He held faculty positions in the Graduate School of Education, University of California, Berkeley and the Harvard Department of Statistics. He is a Fellow of the American Statistical Association, the Institute of Mathematical Statistics, and the American Association for the Advancement of Science. He is an elected Member of the International Statistical Institute and a past president of the Psychometric society. He was awarded the (AERA/ACT) E. F. Lindquist Award, in 2000, and was designated a National Associate of the National Academies of Science in 2002.

"The book is nicely laid out, is extremely well written, and is an excellent text for a semester course or a short course…The book is highly recommended." Short Book Reviews of the International Statistical Institute, December 2004

"This book is well-written and the presentation is clear, rigorous, and concise...A rich set of applications is used to illustrate the methods...This book is a gem! I highly recommend it to any statistician or psychometrician who has even a passing interest in test equating." Pscyhometrika, March 2006

"This is a great book, and it is the first to focus on the kernel method of test equating." Applied Psychological Measurement, September 2005

"The book is nicely laid out, is extremely well written, and is an excellent text for a semester course or a short course. There are sixty-three diagrams and seventy-two references. The book is highly recommended." (N.R. Draper, Short Book Reviews, Vol. 24 (3), 2004)

"The book is an important and well-written contribution to the problem of test equating in psychometry and will be welcomed by all researchers in this field." (Joachim Krauth, Mathematical Reviews, 2004j)