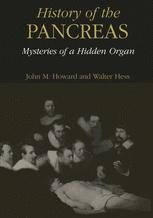 History of the Pancreas: Mysteries of a Hidden Organ

Never before has a comprehensive history of the pancreas like History of the Pancreas been published. It not only is a historical review of the science of medicine, it is liberally interspersed with anecdotal vignettes of the researchers who have worked on this organ. Much of it, such as the discovery of the duct of Wirsüng, of the islets of Langerhans, of insulin, gastrin and their tumors, reads like the adverture, which it is.

This book, divided into 14 chapters, is written in a narrative style and is easily readable, as glimpses of the investigators, those who failed as well as those who succeeded, adds both perspective and human interest. Each chapter is completely referenced, totaling over 1500 references.

As a reference book for students, teachers, investigators, writers, its detailed hjistorical documentation is unique. From the pre-Christian era of Asia Minor, to Greece, Rome, Europe and America, to the explosive progress in Japan, the history is there. History of the Pancreas: Mysteries of a Hidden Organ fills a gap.

Dr. John M. Howard, an internationally honored student of pancreatic diseases and a pioneer pancreatic surgeon, is the author or co-author of over 400 scientific reports and 12 books, including the renowned "Surgical Diseases of the Pancreas", now in its third edition. He is Emeritus Professor of Surgery at the Medical College of Ohio in Toledo, USA.

Dr. Walter Hess, a master surgeon with an internationally based clinical practice in Zurich, grew up in Switzerland. There he learned not only the ancient languages of Greek and Latin but the modern ones of English, French, German, Spanish and Italian. Co-author of the magnificent 4 volume English-language series entitled Textbook of Bilio-Pancreatic Diseases and its editions in German, Italian and French, Dr. Hess has been honored as Visiting Professor and recipient of numerous awards throughout the world. He is Emeritus Professor of Surgery at the University of Basel, Switzerland.

"Although this book focuses on the history of the pancreas, it is a fascinating retreat into many other aspects of the history of medicine. John Howard and Walter Hess have spent their professional lives as academic pancreatic surgeons. Their book is the culmination of a prodigious effort to bring together a literature that begins with the Greek anatomist and surgeon Herophilus, who first described the pancreas around 300 b.c., and ends with the modern-day physicians and scientists who continue to expand our knowledge of the pancreas. History books can sometimes be a dull catalogue of events. Howard and Hess have made the journey personal with their insights into each investigator and into the ways in which various discoveries were made. Many of these discoveries were not focused efforts to understand the pancreas but observations made serendipitously. We are also treated to glimpses into the lives of many famous people, some of whom are well known for their discoveries outside the study of the pancreas but who also provided new knowledge of the anatomy and function of the pancreas. This well-organized book begins with early observations of the anatomy of the pancreas and accounts of the early experiments conducted to determine its function. We are brought from one of the first descriptions of the pancreas, as a "cushion of the stomach and pad supporting the vessels," to the discovery of the pancreatic duct by Johann Georg Wirsung in 1642. Wirsung made this discovery when he was a medical student in Padua, Italy, where he performed the autopsies before his mentor, Johann Wesling, presented the demonstration-lectures to the public in the anatomy theater. The next year, Wirsung was assassinated. His mentor, Wesling, was accused of the crime, the motive for which was rumored to be jealousy, but was eventually acquitted. Such vignettes add spice to the history of these discoveries and offer insight into the people who had a role in the history of knowledge about the pancreas and the times in which they lived. The studies that led to the determination of the function of the exocrine pancreas include those of Johann Conrad Brunner, who examined the effect of ligation of the pancreatic duct in dogs, the work of others who determined the acidity of pancreatic juice by tasting it, and Tiedemann and Gmelin's identification of the role of pancreatic juice and bile in digestion. Subsequent chapters focus on the history of acute and chronic pancreatitis, the discovery of the pancreatic islets and their relation to diabetes, and the identification of various tumors specific to this gland. The development of interventional approaches is presented in detail, including the first endoscopic retrograde cholangiopancreatography in 1965 by Rabinov and Simon, radiologists at Boston's Beth Israel Hospital, and the Whipple procedure in 1934 by Allen Whipple at the Columbia-Presbyterian Medical Center in New York. Many medical history books would stop at this point. This book, however, continues the journey into the present, bringing us up to date on contemporary researchers, new surgical procedures including islet-cell transplantation, and recently discovered genes. Although I initially found the size of this textbook daunting, the book is easy to read. This is in part owing to the fascinating portrayal of each of the major players who participated in developing our present understanding of the pancreas. It also reflects the authors' understanding of the history of medicine itself -- especially how discoveries were made before the era of high technology. This book will benefit not only anyone interested in the pancreas and the gastrointestinal tract, but also readers who want insights into the history of medicine." (Steven D. Freedman, M.D., Ph.D. in  the New England Journal of Medicine, September 2003)

"History Of The Pancreas creates a layered timeline meant to record the major discoveries surrounding the organ … . In sum, this treatise serves to outline the pancreas for clinicians and surgeons who now can use the information to formulate better approaches to patient treatment." (John Aiello, The Electric Review, January/February, 2009)