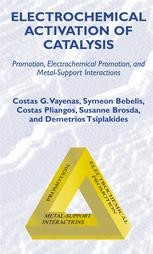 I knew nothing of the work of C. G. Vayenas on NEMCA until the early nineties. Then I learned from a paper of his idea (gas interface reactions could be catalyzed electrochemically), which seemed quite marvelous; but I did not understand how it worked. Consequently, I decided to correspond with Professor Vayenas in Patras, Greece, to reach a better understanding of this concept. I think that my early papers (1946, 1947, and 1957), on the relationship between the work function of metal surfaces and electron transfer reactions thereat to particles in solution, held me in good stead to be receptive to what Vayenas told me. As the electrode potential changes, so of course, does the work function at the interface, and gas metal reactions there involve adsorbed particles which have bonding to the surface. Whether electron transfer is complete in such a case, or whether the effect is on the desorption of radicals, the work function determines the strength of their bonding, and if one varies the work function by varying the electrode potential, one can vary the reaction rate at the interface. I got the idea. After that, it has been smooth sailing. Dr. Vayenas wrote a seminal article in Modern Aspects of Electrochemistry, Number 29, and brought the field into the public eye. It has since grown and its usefulness in chemical catalytic reactions has been demonstrated and verified worldwide.

From the foreword:
"Electrochemical Activation of Catalysis contains a very full and detailed treatment of the mechanisms of electrochemical promotion. It is likely to remain the standard work on this remarkable new technology; for who other than the present authors will write a book with such a background of authority in the field? ...there is a great deal of substance to this book on the electrochemical promotion of catalysis. But the joy is that it has been set down in a very lucid way so that I seldom had to pause to scan a sentence a second time for meaning."
(John O'M. Bockris, Molecular Green Technology)

"From the reviews:
This book is well organized and well written. It integrates such diverse topics as catalytic promotion, spillover, metal-support interactions, solid-state physics, and transport modeling to show how these topics bear on electrochemical promotion of catalysis-and at the same time, illustrates how the study of electrochemical promotion can throw light on our understanding of these important topics of physical chemical research. Electrochemical Activation of Catalysis is recommended reading to anyone with some interest in chemical reactions on solid surfaces."
(Gary L. Haller, Yale University)
"Electrochemical Activation of Catalysis is a significant milestone in the literature of both electrochemistry and catalysis[...]The book's timing coincides with the present-day upsurge of interest in fuel cells of all sorts. For those new to its field, the book is an excellent learning opportunity. For the expert, it provides a rigorous quantitative framework and a thorough review of the literature. Therefore, the book will be a valuable tool for the student and practitioner alike."
(L. Louis Hegedus, Atofina Chemicals, Inc.)
"[...]The appendix of the book compiles most interesting questions, which will help the reader gain a better insight into the authors' views. The appendix also contains concrete advise on how to build a catalytic reactor and choose materials and equipment for experiments on the electrochemical promotion. All seventeen major research groups that work in this field are briefly characterized. The book contains an extensive bibliography, which includes a sufficient number of references to papers by Russian scientists. [...]The book is very interesting. It is prefaced by an intriguing and exciting article by J. O'M. Bockris, who greets the appearance in Greece of bright electrochemical talents and non-trivial electrochemical studies.'
(O.A. Petrii in Russian Journal of Electrochemistry, 38:9, 2002)
"This book provides a thorough understanding of a field that has tremendous growth potential, particularly in the area of electrochemical promotion of nonredox systems[...] I highly recommend it."
(Eugene S. Smotkin in JACS, 124, 2002)
"The electrochemical modification of catalytic activity is one of the most important developments in electrochemistry during the past 20 years. Today, more than 2000 papers have been published on this subject, many of them from the very active group of Costas G. Vayenas at the University of Patras in Greece and his coworkers[...] Owing to the work of Vayenas and his group there is growing interest in industry[...] The present book should be read by all scientists in the field of electrochemistry and heterogeneous catalysis, particularly if they are working in applied science[...] It took the main author 20 years to approach the current state of knowledge and to spread his ideas with enormous energy[...] The origin of electrochemical promotion is fundamental and the phenomenon itself leads to new concepts in solid state electrochemistry. The book is self-contained and its content can be understood without major difficulties by graduate students in chemistry[...]the book should be on the shelves of any laboratory that is working either in solid state electrochemistry or heterogeneous catalysis."
(Jürgen Janek in Journal of Solid State Electrochemistry, 7, 2002)