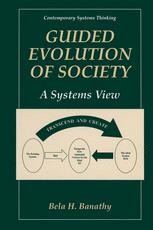 Based on a comprehensive review of human and societal evolution the book develops an approach to conscious, self-guided evolution.
In the course of the evolutionary journey of our species, there have been three seminal events. The first happened some seven million yeas ago, when our humanoid ancestors entered on the evolutionary scene. Their journey toward the second crucial event lasted over six million years when - as the greatest event of our evolutionary history - homo sapiens sapiens, started the revolutionary process of cultural evolution. Today, we have arrived at the threshold of the third major event, `the revolution of conscious evolution,' when it becomes our responsibility to enter into the evolutionary design space and guide the evolutionary journey of our species.
The book tells the story of the first six million years of the journey in just enough detail to understand how evolution had worked in times when it was primarily biological, driven by natural selection. With the human revolution some fifty thousand years ago, with the emergence of self-reflective consciousness, the evolutionary process transformed from biological into cultural. From this point on, the book follows the journey with detailed attention, in order to learn how cultural evolution works. The book is organized in three parts. Part One commences with an exposition of a brief history of the evolutionary idea through time with a focus on a review of the science of general evolution and specifically social and societal evolution. Next, the book unfolds the `evolutionary story' of our species from the time when the first humanoids entered the evolutionary scene to our current era. Part Two develops a systems view of evolution, explores the ways and means of how evolution works, characterizes evolutionary consciousness and develops the idea of conscious evolution. Part Three builds upon the knowledge developed in the first two parts and sets forth the key conditions of conscious, self-guided evolution, elaborating the core condition, which is the acquisition of evolutionary competence through evolutionary learning. The focus of this part is on an approach to the design of evolutionary guidance systems that our families, neighborhoods, communities, organizations, social and societal systems can use to design the future they aspire to attain.
The work is set aside from other statements in three important ways. It provides: (1) a comprehensive review of how evolution has worked with a focus on socio-cultural evolution, (2) an explanation of evolutionary consciousness and the conditions of engaging in conscious evolution, and (3) most significantly, it develops a detailed approach and a methodology to the design of evolutionary guidance systems.

` Professor Banathy is the world's foremost expert on evolutionary design. In this benchmark work he trances our immense human journey from the earliest hominoids through the emergence of self-awareness and culture, and down to the present moment when we as a species must take our evolutionary heritage into our own hands. With the skill of a lifetime of research and application, Banathy guides the reader through the principles of evolutionary learning and design toward a tomorrow in which evolutionary competence can replace humankind's present blind rush into the future. This is a superb work that will be of interest to theorists and advanced students alike.'
Professor Allan Combs, Author of "The Radiance of Being", co-author of "Changing Visions: Human Cognitive Maps, Past, Present and Future"
`People all over the world aspire to practicing democracy, and yet the democratic ideal of participating in planning and designing any social system, from cities to national health care, is compromised by the inability to engage the stakeholders in a meaningful and productive dialogue. By (re)asserting the fundamental right of human beings to participate directly in making decisions that affect their lives, and to guide their own destiny by applying evolutionary competence and evolutionary epistemology, Banathy's book is a major achievement! Guided Evolution of Society is going to change the way democracy is interpreted in an evolutionary context; it could very well also alter how it will be practiced in the "New Agoras of the 21st Century."'
Aleco Christakis, Ph.D. CEO, CWA Ltd.
`There is no more important task for humanity's future than consciously taking charge of our own evolution. Our times are unique in that we are being pushed by ecological necessity as well as pulled by evolutionary opportunity to a higher level of functioning and purpose as a collective human organism. Bela Banathy brings pioneering scholarship and multiple modes of learning to the most important and exciting challenge of our times &endash becoming self-directed agents of our own evolution.'
Duane Elgin, Author of "Voluntary Simplicity, Awakening Earth, Promise Ahead"
`In this remarkable book, Bela Banathy introduces his readers to conscious evolution, an emerging phenomenon in the twenty-first century. One could not ask for a wiser, more dependable guide into this uncharted territory.'
Stanley Krippner, Ph.D. Professor of Psychology, Saybrook Graduate School, Co-author, C-editor, "Broken Images, Broken Selves"
`An outstanding guide to the practice of evolutionary competence, crucial in these times of change and transformation. Should be read &endash and followed &endash by everyone.'
Professor Ervin Laszlo, Founder of the General Evolutionary Research Group and author of "Whispering Pond, The Consciousness Revolution, and Macroshift"
`Guided Evolution of Society is a highly significant achievement by one of the foremost scholars of systems science. In it Bela H. Banathy does a marvelous job of tracing the biological and cultural development of human species, so clear, complete, and compelling that the reader's sense of time will never be the same again. He leads toward and concludes with the finest articulation yet of mechanisms by which individuals and groups can gain control of their future. This is a very powerful book.'
Professor Gordon Rowland, Ithaca College, Author of "Tripartite Seed: The Future Creating Capacity of Designing, Learning, and Systems"