Birds of a feather mob together 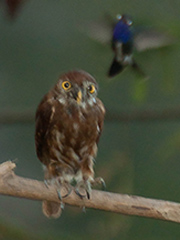 Dive bombing a much larger bird isn’t just a courageous act by often smaller bird species to keep predators at bay. It also gives male birds the chance to show off their physical qualities in order to impress females. This is according to a study in Springer’s journal Behavioral Ecology and Sociobiology on predator mobbing behavior of birds where potential prey approach and harass would-be predators such as owls. The study was led by Filipe Cunha of the University of Zurich in Switzerland and the Federal University of Ouro Preto in Brazil.

In birds, mobbing behavior includes calls, aerial swoops and even physical attacks. For a long time, researchers believed that this behavior mainly served as protection against predators, since most predators move away in response to mobbing.

As an added bonus, mobbing might give males the chance to advertise who has the best physical qualities, in an effort to impress potential mating partners. To investigate this further, Cunha and his fellow researchers studied what happened when replicas of two types of owls of similar size were presented to a bird community in south-eastern Brazil. The models were of a pygmy owl that regularly eats birds, and of a less threatening burrowing owl. The researchers measured the size of the mob that then assembled, the intensity by which individual members participated in the mock attacks, and whether things changed if females from the same species were present.

While 79 different bird species were seen to mob the models, data from only 19 sexually dimorphic species were included in the current study. In these species, males and females are easily distinguished from one another in the field.

These experiments showed that the mobbing was more intense when the less-threatening burrowing owl model was put out. This is in line with other findings that birds know whether there is a high or low risk associated with certain predators or behavior.

In most cases, the mobs were made up of males. The group size did not influence the intensity by which males participated in these anti-predatory activities. Males in the 19 species were, however, definitely more likely to up their game when more females from their own species were around.

Cunha explains, “Females may use these mobbing events to assess a male’s quality, for example their motor skills which allow them to escape from an attacking predator. This characteristic may provide clues about how well a male will be able to defend a nest or to forage.”

The findings highlight the importance of sexual selection and help to better understand the evolution of anti-predatory behavior. Moreover, they show that mobbing not only has a predator deterrence function.

“Recent studies showed that predator mobbing has other important social functions, such as to teach younger birds to distinguish friend from foe,” says Michael Griesser, co-author of the study.