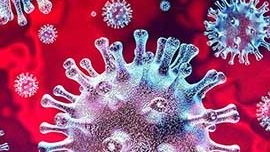 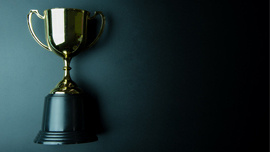 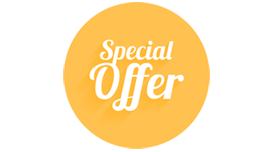 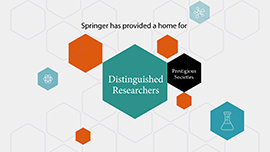 Featuring our authors' voices about their publishing experiences, the video shows you why Springer should be the publisher of your choice. 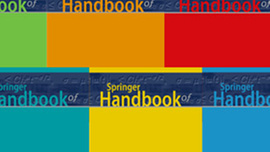 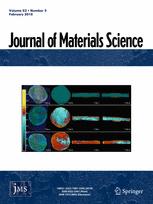 Cross-correlation of electron backscatter diffraction patterns has been used to generate stress and strain maps of a single crystal of tetragonal barium titanate (BaTiO3) containing bundles of small, (0.2–5) μm, a- and c-domains separated by 90° domain boundaries. The strains peaked at the domain boundaries, and approximately equal, but opposite, values were observed in the a- and c-domains; the peak strain magnitudes were slightly less than half the tetragonal distortion of BaTiO3, about 0.004, consistent with a tendency to a cubic structure at domain boundaries... 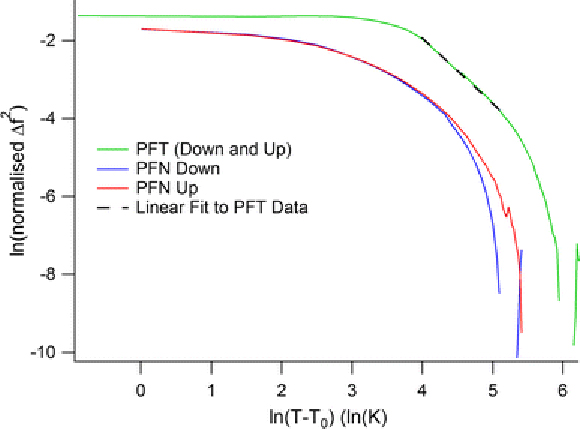 ...At intermediate compositions, the ferroelastic microstructure has strain heterogeneities on a mesoscopic length scale and, probably, also on a microscopic scale. This results in a wide anelastic freezing interval for strain-related defects rather than the freezing of discrete twin walls that would occur in a conventional ferroelastic material. In PFT, however, the acoustic loss behaviour more nearly resembles that due to freezing of conventional ferroelastic twin walls... 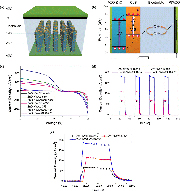 Photodetectors based on photoconductivity effect are usually driven by an external power source. A self-powered photodetector can be powered by incident light using the photovoltaic effect. Here, photoelectrochemical cells with periodically aligned ZnO/CdS nanowire arrays as photoanodes were fabricated and investigated for detecting UV and visible light. At zero bias, this self-powered UV–visible photodetector showed high responsivities of 35.4 and 23.2 mA/W for UV and visible light, a fast rise time of 0.18 s, and a decay time of 0.32 s. The spectral responses of the self-powered photodetectors based on ZnO/CdS nanowire arrays exhibited superior photoresponse in both UV and visible regions in comparison with ZnO nanowire film and ZnO nanowire arrays. The high photosensing performance originates from the excellent light trapping ability at broadband wavelengths and the high charge collection efficiency of the highly ordered ZnO/CdS nanowire arrays. The results indicate that the ZnO/CdS heterojunctions with periodic nanostructures provide a facile frame for UV–visible detecting applications.

Mechanical failure of polycrystalline metals is often difficult to predict, in part because of the wide range of conditions under which individual elements of the material’s microstructure fail. We describe an efficient method for posing, assessing, and optimizing failure criteria for individual microstructural elements, such as grains, grain boundaries, precipitates, or precipitate–matrix interfaces. Such criteria may lead to improved failure predictions for polycrystalline metals. Our method constructs a failure probability function from a database of individual failure events obtained from experiments on polycrystalline samples. It then uses the Kullback–Leibler (K–L) divergence to compare it to probability densities corresponding to specific hypothesized failure mechanisms. The likeliest failure mechanism is the one that minimizes the K–L divergence with respect to a suitably chosen null hypothesis. As a demonstration, we apply this approach to hydrogen-assisted crack initiation at coherent twin boundaries in Ni-based alloy 725 and deduce a best-fit failure criterion for them. 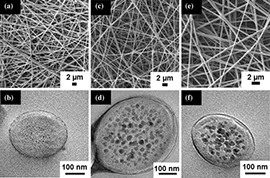 ...The presence of the ceramic on the surface of the membrane in addition to the increased amorphous regions leads to excellent ionic conductivity and cycling performance. The 30 wt% PDC sample has an ionic conductivity of 1.05 mS cm−1 compared to 0.29 mS cm−1 of pristine PAN separator. All separators with additional PDC content showed increased initial capacity and capacity retention at 0.2C charging and discharging rate, with the 90:10, 80:20, and 70:30 wt% of PAN:PDC showing 89, 90 and 93% capacity retention of graphite/LiCoO2 full cells over 100 cycles, respectively...

Phase-field modeling of eutectic structures on the nanoscale: the effect of anisotropy

A simple phase-field model is used to address anisotropic eutectic freezing on the nanoscale in two (2D) and three dimensions (3D). Comparing parameter-free simulations with experiments, it is demonstrated that the employed model can be made quantitative for Ag–Cu. Next, we explore the effect of material properties and the conditions of freezing on the eutectic pattern. We find that the anisotropies of kinetic coefficient and the interfacial free energies (solid–liquid and solid–solid), the crystal misorientation relative to pulling, the lateral temperature gradient play essential roles in determining the eutectic pattern. Finally, we explore eutectic morphologies, which form when one of the solid phases are faceted, and investigate cases, in which the kinetic anisotropy for the two solid phases is drastically different.​​​​​​​

...In this paper, a semi-analytical model applied to roughness measurements is used to understand this relationship. Good agreement is found between the model results and the experimental results. Analysis of the semi-analytical model confirmed that the identified relationship is caused by the topography and not by some experimental bias and that the relevant scale for the computation of Sq is the scale of the indentation imprints (15 µm). However, the relationships found with the model and the experimental results show different slopes and y-intercepts. The y-intercept found with the numerical curves is negligible compared with the y-intercept identified with the experimental curve, which is equal to 30 nm. This indicates that even if Sq is equal to zero, the zero-point of the curve is not accurately determined by the instrumented indentation device. As for the differences in slope, these may be partly due to experimental noise and the differences of methodology of detections of first-contact for the recording of the load–displacement curves. Overestimation of the resistance of abrasion debris by the semi-analytical model may also explain the differences of slopes. However, further testing is required to confirm this hypothesis.

A new convenient and easy-scalable one-step synthetic strategy to achieve metal-containing polymer nanoparticles for applications as magnetic resonance imaging contrast agent is reported. In this study, a novel contrast agent based on poly(gadolinium methacrylate) (poly(Gd(MAA)3)) nanoparticles was prepared by one-step aqueous dispersion polymerization of gadolinium methacrylate monomer (Gd(MAA)3), whereby stable particles were obtained due to the association of GdIII with the polymer carboxylate anions, which provided latent crosslinking of the polymer nanoparticles without the addition of further crosslinking reagents...

The ability of Ce-containing bioactive glasses, based on 45S5 Bioglass®, to inhibit oxidative stress in terms of reduction in hydrogen peroxide and superoxide (O2−), by mimicking the catalase and superoxide dismutase activity is reported in this work. The characterization is performed on the powders of pristine glasses and after the soaking in H2O2 solutions and simulated body fluid. The glass samples are analysed by XPS, XRD, UV–Vis and FT-IR.

The tensile behavior of an additively manufactured (AM) polymer matrix composite (PMC) is studied with in situ X-ray computed microtomography (CT) and digital volume correlation (DVC). In this experiment, the effects of recycled material content and print direction on the selective laser-sintered (SLS) material’s mechanical response are explored. The PMC samples are printed in a tensile specimen geometry with gage lengths parallel to all three orthogonal, primary sintering directions. In situ tensile-CT experiments are conducted at Argonne National Laboratory’s Advanced Photon Source 2-BM beamline. Analysis of the AM PMC’s tensile response, failure, and strain evolution is analyzed both from a conventional standpoint, using the load–displacement data recorded by the loading fixture, and from a microstructural standpoint by applying DVC analysis to the reconstructed volumes. Significant variations on both strength and ductility are observed from both vantages with respect to print direction and the recycled material content in the printed parts. It is found that the addition of recycled source material with a thermal history reduces the tensile strength of the SLS composite for all directions, but the effect is drastic on the strength in the layering direction.

​​​​​​​...Despite the difficulties to measure the strain, the dispersion observed in the results and the limited reliability of the materials properties, the results constitute a step towards a better understanding of the material behaviour. Thermal residual stresses induced by the manufacturing were also evaluated. Tensile residual stresses in yttria-stabilised zirconia and compressive residual stresses in YAG and alumina were highlighted. This evaluation also shed light on the influence of the phase morphology in the microstructure. Indeed, the computed spatial distribution of the residual stresses showed that they are different from one position to another due to the variation in phase morphology and also to material properties variability. Therefore, it is important when numerically assessing the thermomechanical properties to take into account the microstructure morphology as well as the variability of material properties.