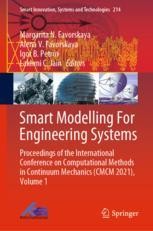 Proceedings of the International Conference on Computational Methods in Continuum Mechanics (CMCM 2021), Volume 1

This book is a collection of research papers selected for presentation at the International Conference on Smart Computational Methods in Continuum Mechanics 2021, organized by Moscow Institute of Physics and Technology and the Institute for Computer Aided Design of Russian Academy of Sciences. The work is presented in two volumes. The primary objective of the book is to report the state-of-the-art on smart computational paradigms in continuum mechanics and explore the use of artificial intelligence paradigms such as neural nets, and machine learning for improving the performance of the designed engineering systems. The book includes up-to-date smart computational methods which are used to solve problems in continuum mechanics, engineering, seismic prospecting, non-destructive testing, and so on. The main features of the book are the research papers on the application of novel smart methods including neural nets and machine learning, computational algorithms, smart software systems, and high-performance computer systems for solving complex engineering problems. The case studies pertaining to the real-world applications in the above fields are included. The book presents a collection of best research papers in English language from some of the world leaders in the field of smart system modelling and design of engineering systems.

Dr. Margarita N. Favorskaya is Professor and Head of the Department of Informatics and Computer Techniques at Reshetnev Siberian State University of Science and Technology, Russian Federation. Professor Favorskaya is a member of KES organization since 2010, the IPC member, and Chair of invited sessions of over 30 international conferences. She serves as Reviewer in international journals (Neurocomputing, Knowledge Engineering and Soft Data Paradigms, Pattern Recognition Letters, Engineering Applications of Artificial Intelligence), Associate Editor of Intelligent Decision Technologies Journal, International Journal of Knowledge-Based and Intelligent EngineeringSystems, and International Journal of Reasoning-based Intelligent Systems, Honorary Editor of the International Journal of Knowledge Engineering and Soft Data Paradigms, Reviewer, Guest Editor, and Book Editor (Springer). She is the author/co-author of 200 publications and 20 educational manuals in computer science/engineering. She co-authored/co-edited ten books for Springer recently. She supervised nine Ph.D. and is presently supervising four Ph.D. students