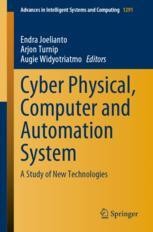 A Study of New Technologies

This book is a collection of extended papers presented at the Cyber Physical, Computer and Automation System (CPCAS 2019), Bali – Indonesia, 13–15 November 2019. The book includes chapters in three prime areas: (1) autonomous systems and controls; (2) human–machine interaction and human-related engineering; and (3) interconnected things. Autonomous systems and controls are systems of engineering that work with or without human intervention. Human–machine interaction involves sensor and actuator technology to detect human behavior, intentions, and decisions and also to provide the ability of a machine to interact with humans to achieve the expected performance. Interconnected things consist of a network of computer-controlled physical mechanisms communicating with each other for efficient operation and improving system capabilities.

Endra Joelianto (MIEEE’01) received his B.Eng. degree in Engineering Physics from Bandung Institute of Technology (ITB), Indonesia, in 1990, and his Ph.D. degree in Engineering from The Australian National University (ANU), Australia, in 2002. He was a Research Assistant in the Instrumentation and Control Laboratory, Department of Engineering Physics, Bandung Institute Technology, Indonesia, from 1990 to 1995. Since 1999, he has been with the Department of Engineering Physics, Bandung Institute of Technology, Bandung, Indonesia, where he is currently an Associate Professor. He has been a Senior Research Fellow in the Centre for Unmanned System Studies (CENTRUMS) since 2007, National Centre for Sustainable Transportation Technology (NCSTT) and Centre for Security and Defence since 2016 at Bandung Institute of Technology, Bandung, Indonesia. He is an Associate Editor of the International Journal of Artificial Intelligence (IJAI), India, since 2008, the Editor-in-Chief of the Journal of Instrumentation and Automation Systems (JIAS), Korea–Indonesia, since 2014, and the advisory Editor of the Journal of Mechatronics, Electrical Power, and Vehicular Technology (JMEV), Indonesia, since 2016. He was an editorial advisory board of the International Journal of Intelligent Unmanned Systems (IJIUS), Emerald 2013-2017. He served as a Guest Editor for the International Journal of Applied Mathematics and Statistics (IJAMAS), International Journal of Imaging and Robotics (IJIR), and Internetworking Indonesia Journal (IIJ). He serves as a reviewer for several reputable international journals of IEEE, Taylor Francis, Elsevier, etc. He was the Chair of the IEEE Indonesia Section Control Systems and Robotics and Automation Joint Chapter Societies (CSS/RAS) in 2012–2017. He is the Chapter Chair Coordinator of the IEEE Indonesia Section (2017–now).  He received the best paper award in the 3rd International Conference on Kinematics, Mechanics of Rigid Bodies, and Materials 2015 (MECHKINEMATICS 2015), Bali, Indonesia, and the 3rd International Conference on Robotics, Biomimetics, & Intelligent Computational Systems 2018 (ROBIONETICS 2018), Bandung-Indonesia. His research interest includes hybrid control systems, discrete event systems, computational intelligence, robust control, unmanned systems, intelligent automation, and industrial Internet of things. He edited one book on intelligent unmanned systems (Springer) 2009, published one book on linear quadratic control (ITB-Press) 2017, and published more than 150 research papers.

Arjon Turnip received the B.Eng. and M.Eng. degrees in Engineering Physics from the Bandung Institute of Technology, Indonesia, in 1998 and 2003, respectively, and the Ph.D. degree in Mechanical Engineering from Pusan National University, Busan, Korea, under the World Class University program in 2012.  He is currently working at the Technical Implementation Unit for Instrumentation Development, Indonesian Institute of Sciences, Indonesia, as a Research Coordinator. He received Student Travel Grand Award for the best paper from ICROS-SICE International Joint Conference 2009, Certificate of commendation: Superior performance in research and active participation for BK21 program from Korean government 2010, JMST Contribution Award for most citations of JMST papers 2011, Inventor Technology Award from Minister of RISTEKDIKTI 2015, and Bupati Samosir Award for the role and activities of Samosir Development. He is Chairman of the IEEE Indonesia CSS/RAS Joint Chapter. He was an Editor of the Widyariset Journal and the Journal of Mechatronics, Electrical Power, and Vehicular Technology (JMEV). He is the Guest Editor at the Indonesian Internetworking Journal (IIJ) and the International Journal of Artificial Intelligence (IJAI). His research areas are integrated vehicle control, adaptive control, nonlinear systems theory, estimation theory, signal processing, and brain engineering such as brain–computer interface. He published more than 125 research papers.

Augie Widyotriatmo received his bachelor’s degree in Engineering Physics and master’s degree in Instrumentation and Control from the Institut Teknologi Bandung (ITB), Indonesia. He obtained a Ph.D. degree in Mechanical Engineering from Pusan National University, Korea. He is currently an Assistant Professor in Instrumentation and Control Research Group, Faculty of Industrial Technology, ITB, Indonesia. He has published many technical papers in national and international journals and conference proceedings. He received an outstanding paper award in the 18th International Conference on Control, Automation and Systems (ICCAS 2018), South Korea, best paper awards in the 4th International Conference on Industrial Internet of Things 2018 (ICIIOT 2018), Indonesia, and  in the 3rd International Conference on Robotics, Biomimetics, & Intelligent Computational Systems 2018 (ROBIONETICS 2018), Indonesia. He serves as an Associate Editor in the International Journal of Control, Automation, and Systems (IJCAS). He was the Chair of the IEEE Indonesia Section Control Systems and Robotics and Automation Joint Chapter Societies (CSS/RAS) in 2017–2019. His current research includes robotics, material handling vehicles, nonlinear control, energy optimization and automation, biomedical instrumentation, metrology, process automation system, and safety instrumented system. He published more than 90 research papers.