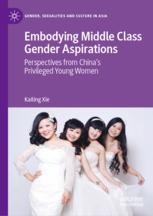 This book takes a feminist approach to analyse the lives of well-educated urban Chinese women, who were raised to embody the ideals of a modern Chinese nation and are largely the beneficiaries of the policy changes of the post-Mao era. It explores young women’s gendered attitudes to and experiences of marriage, reproductive choices, careers and aspirations for a good life. It sheds light on what keeps mainstream Chinese middle-class women conforming to the current gender regime. It illuminates the contradictory effects of neoliberal techniques deployed by a familial authoritarian regime on these women’s striving for success in urban China, and argues that, paradoxically, women’s individualistic determination to succeed has often led them onto the path of conformity by pursuing exemplary norms which fit into the party-state’s agenda.

Kailing Xie (PhD) is a Teaching Fellow at the Department of Politics and International Studies, University of Warwick, UK. She gained her doctorate at the Centre for Women’s Studies, University of York. She was awarded the 2017 Early Career Researcher Prize by the British Association for Chinese Studies for her article ‘Premarital Abortion, What is the Harm? The Responsibilisation of Women’s Pregnancy among China’s “Privileged” Daughters’. Her broader research interests include gender, identity, and nationalism against the backdrop of China’s rise on the global stage.

"The women born of China's one-child generation were considered the lucky ones-- with no brothers to compete with, they were given unprecedented opportunities to excel at school and at work. But with slumping population growth, a fast-aging society and a female shortage, China's 'lucky generation' of women are now bearing the brunt of the party-state's agenda: facing workplace discrimination and enormous societal pressure to be mothers and caretakers.  Kailing Xie's incisive scholarly analysis of the pressures faced by her generation is necessary reading for anyone interested in the far-reaching consequences of the one-child policy, one of the most radical social experiments in modern history. Xie grew up thinking her life was 'like a honey jar, but discovers 'a pretty fish tank is better suited to describe the lives of China's privileged daughters, including myself: it appears to have no boundaries until you hit the invisible glass walls."

— Mei Fong, the Pulitzer-Prize winning journalist and author of One Child: The Story of China's Most Radical Experiment?