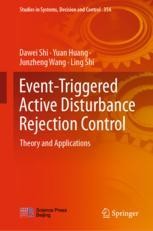 Dawei Shi received the B.Eng. degree in electrical engineering and its automation from the Beijing Institute of Technology, Beijing, China, in 2008, and the Ph.D. degree in control systems from the University of Alberta, Edmonton, AB, Canada, in 2014. In December 2014, he was appointed as Associate Professor at the School of Automation, Beijing Institute of Technology. From February 2017 to July 2018, he was with the Harvard John A. Paulson School of Engineering and Applied Sciences, Harvard University, as Postdoctoral Fellow in bioengineering. Since July 2018, he has been with the School of Automation, Beijing Institute of Technology, as a Professor. His research focuses on analysis and synthesis of complex sampled-data control systems with applications to biomedical engineering, robotics, and motion systems. Dr. Shi serves as a Technical Editor/Associate Editor for IEEE/ASME Transactions on Mechatronics,  IET Control Theory & Applications, and IET Cyber-Systems & Robotics. He served as Associate Editor for IFAC World Congress and is a member of the IEEE Control Systems Society Conference Editorial Board.

Yuan Huang was born in Heilongjiang, China, in 1992. He received the B.Eng. degree in process automation from the School of Chemical Engineering and Environment, Beijing Institute of Technology, Beijing, China, in 2014. He is currently working toward the Ph.D. degree in automation with the Beijing Institute of Technology. His research interests include event-triggered control, nonlinear control, and networked system control.

Junzheng Wang was born in Shaanxi, China, in 1964. He received the Ph.D. degree in control science and engineering from the Beijing Institute of Technology, Beijing, China, in 1994. He is Deputy Director with the Key Laboratory of Intelligent Control and Decision of Complex Systems, Beijing Institute of Technology, where he is Professor and Ph.D. Supervisor. His current research interests include motion control, static and dynamic performance testing of electric and electric hydraulic servo system, and dynamic target detection and tracking based on image technology. Prof. Wang is a senior member of the Chinese Mechanical Engineering Society and the Chinese Society for Measurement. He received the Second Prize of the National Scientific and Technological Progress (Ranked 1st) in 2011.

Ling Shi received the B.S. degree in electrical and electronic engineering from Hong Kong University of Science and Technology, Kowloon, Hong Kong, in 2002, and the Ph.D. degree in Control and Dynamical Systems from California Institute of Technology, Pasadena, CA, USA, in 2008. He is currently Associate Professor at the Department of Electronic and Computer Engineering and Associate Director of the Robotics Institute, both at the Hong Kong University of Science and Technology. His research interests include cyber-physical systems security, networked control systems, sensor scheduling, event-based state estimation, and exoskeleton robots. He is a senior member of IEEE. Dr. Shi served as an editorial board member for the European Control Conference 2013–2016. He was Subject Editor for International Journal of Robust and Nonlinear Control (2015–2017). He has been serving as Associate Editor for IEEE Transactions on Control of Network Systems from July 2016 and Associate Editor for IEEE Control Systems Letters from February 2017. He also served as Associate Editor for a special issue on Secure Control of Cyber Physical Systems in the IEEE Transactions on Control of Network Systems in 2015–2017. He served as General Chair of the 23rd International Symposium on Mathematical Theory of Networks and Systems (MTNS 2018).