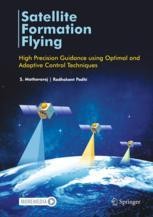 Small satellite technology is opening up a new era in space exploration offering reduced cost of launch and maintenance, operational flexibility with on-orbit reconfiguration, redundancy etc. The true power of such missions can be harnessed only from close and precise formation flying of satellites. Formation flying missions support diverse application areas such as reconnaissance, remote sensing, solar observatory, deep space observatories, etc. A key component involved in formation flying is the guidance algorithm that should account for system nonlinearities and unknown disturbances. The main focus of this book is to present various nonlinear optimal control and adaptive guidance ideas to ensure precise close formation flying in presence of such difficulties. In addition to in-depth discussion of the relevant topics, MATLAB program files for the results included are also provided for the benefit of the readers. Since this book has concise information about the various guidance techniques, it will be  useful reference for researchers and practising engineers in the space field.

Dr. Mathavaraj S is a space scientist working at the Indian Space Research Organization (ISRO). He earned his Bachelor of Engineering in Aeronautical Engineering from Hindustan College of Engineering, Padur, followed by Master of Technology in Aerospace Engineering from Indian Institute of Technology, Madras and Ph.D. in Aerospace Engineering from Indian Institute of Science, Bengaluru. His interest in space dynamics made him pursue his career in Flight Dynamics Group at U. R. Rao Satellite Center (URSC) of ISRO. His contributions at ISRO include maneuver strategy design for geostationary orbit and lunar capture orbits, attitude profile generation during engine firing and constrained trajectory optimization for soft lunar landing. He is also passionate about formation flying of satellites. For his contribution in the space field, he received ISRO's Young Scientist award in 2018.

Dr. Radhakant Padhi is currently working as a Professor in the Department of Aerospace Engineering and also in the Center for Cyber Physical Systems, Indian Institute of Science (IISc), Bangalore. He earned his Masters and Ph.D. in Aerospace Engineering from IISc Bangalore and Missouri University of Science and Technology, USA respectively. Dr. Padhi is a Fellow of Indian National Academy of Engineers, a Fellow of Institution of Engineers (India) and a Fellow of Institution of Electronics and Telecommunication Engineers. He is an Associate Fellow of American Institute of Aeronautics and Astronautics (AIAA), a Senior Member of Institute of Electrical and Electronics Engineers (IEEE). He is a Vice Chair of the Publication Board of the International Federation of Automatic Control (IFAC) and has been a member of its Council during 2014-2020. He is a life member of Aeronautical Society of India, Systems Society of India and Soft Computing Research Society. Dr. Padhi's research interest lies in synthesis of algorithms in optimal and nonlinear control as well as state estimation. He works on diverse application areas such as control and guidance of aerospace vehicles, biomedical systems, mechanical systems, distributed parameter systems, and industrial process control. He has over 250 publications in international journals and conferences. His research is well-supported by Ministry of Human Resource Development, Government of India, Defence Research  Development Organisation of India, Indian Space Research Organisation, Air Force Research Lab of USA, Agency for Defence Development of South Korea, etc.