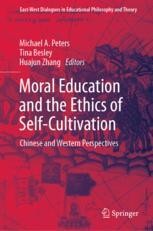 Moral Education and the Ethics of Self-Cultivation

Educational philosophies of self-cultivation as the cultural foundation and philosophical ethos for education have strong and historically effective traditions stretching back to antiquity in the classical ‘cradle’ civilizations of China and East Asia, India and Pakistan, Greece and Anatolia, focused on the cultural traditions in Confucianism, Taoism, and Buddhism in the East and Hellenistic philosophy in the West. This volume in East-West dialogues in philosophy of education examines both Confucian and Western classical traditions revealing that although each provides its own distinct figure of the virtuous person, they are remarkably similar in their conception and emphasis on moral self-cultivation as a practical answer to how humans become virtuous. The collection also examines self-cultivation in Japanese traditions and also the nature of Michel Foucault’s work in relation to ethical and aesthetic ideals of Hellenistic self-cultivation.

Michael A. Peters (PhD, FNZAH, FRSA, FRSNZ, FPESA) is Distinguished Professor of Education at Beijing Normal University Faculty of Education PRC, and Emeritus Professor in Educational Policy, Organization, and Leadership at the University of Illinois at Urbana–Champaign. He is also Senior Research Fellow at the University of Auckland. He is the Editor-in-Chief of the journal, Educational Philosophy and Theory  and The Beijing International Review of Education (with Professor Xudong Zhu). He is also the founding editor of eight international journals.  His interests are in education and philosophy and he has written over one hundred books, including several books on Wittgenstein. He has acted as an advisor to governments in the USA, Scotland, NZ, South Africa, UNESCO and the EU. He was made an Honorary Fellow of the Royal Society of New Zealand in 2008 and awarded honorary doctorates by State University of New York (SUNY at Empire State) in 2012 and University of Aalborg in 2015. He was made an Hon Fellow of the Society for Research in Higher Education (SRHE) in 2010. His recently published books include: Wittgenstein, Education and the Problem of Rationality (2021), Wittgenstein, Antifoundationalism, Technoscience and Philosophy of Education (2020), The Chinese Dream: Educating the Future (2019), The Companion to Wittgenstein and Education: Pedagogical Investigations (2017).

Tina Besley is a Distinguished Professor at the Faculty of Education, Beijing Normal University. She was previously Professor and Associate Dean International, in the Faculty of Education, University of Waikato, New Zealand; Research Professor, University of Illinois Urbana Champaign; Full Professor, California State University San Bernardino; and Research Fellow at the University of Glasgow where she began her academic career in late 2000, after 16 years a secondary school teacher, Head of Guidance, and Counsellor in New Zealand. She is the founding president of the Association for Visual Pedagogies and Past President of the Philosophy of Education Society of Australasia and honoured as a Fellow of both learned societies. She is a Fellow of the Royal Society of Arts, UK. In Philosophy of Education, she uses the later work of Michel Foucault on subjectivity, free speech, governmentality. In global studies in education she explores policy, identities and cultures and interculturalism. Tina works closely with Prof. Michael A. Peters and with a wide international network of scholars in editorial roles for many journals and books. She has published over 30 books and monographs and numerous journal articles. Currently she and is Editor and Project manager for PESA Agora, associate editor of Educational Philosophy and Theory, and The Beijing International Review of Education.

Huajun Zhang (PhD) is an Associate Professor at Faculty of Education at Beijing Normal Unviersity. Her research areas are history of thoughts of education and China’s modern educational transformation and how teachers play the role. She is the author of the book John Dewey, Liang Shuming and China’s Education Reform: Cultivating Individuality (2013). She is the guest editor of the special issue John Dewey and Chinese Education: A Centennial Reflection at Beijing International Review of Education (Vol. 1, No. 4, 2019). She also serve as the Associate Editor of the English academic journal Beijing International Review of Education and Frontiers of Education in China.