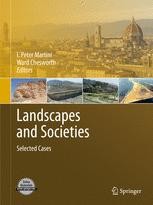 This book contains case histories intended to show how societies and landscapes interact. The range of interest stretches from the small groups of the earliest Neolithic, through Bronze and Iron Age civilizations, to modern nation states. The coexistence is, of its very nature reciprocal, resulting in changes in both society and landscape. In some instances the adaptations may be judged successful in terms of human needs, but failure is common and even the successful cases are ephemeral when judged in the light of history.

Comparisons and contrasts between the various cases can be made at various scales from global through inter-regional, to regional and smaller scales. At the global scale, all societies deal with major problems of climate change, sea-level rise, and with ubiquitous problems such as soil erosion and landscape degradation. Inter-regional differences bring out significant detail with one region suffering from drought when another suffers from widespread flooding. For example, desertification in North Africa and the Near East contrasts with the temperate countries of southern Europe where the landscape-effects of deforestation are more obvious. And China and Japan offer an interesting comparison from the standpoint of geological hazards to society - large, unpredictable and massively erosive rivers in the former case, volcanoes and accompanying earthquakes in the latter. Within the North African region localized climatic changes led to abandonment of some desertified areas with successful adjustments in others, with the ultimate evolution into the formative civilization of Egypt, the "Gift of the Nile". At a smaller scale it is instructive to compare the city-states of the Medieval and early Renaissance times that developed in the watershed of a single river, the Arno in Tuscany, and how Pisa, Siena and Florence developed and reached their golden periods at different times depending on their location with regard to proximity to the sea, to the main trunk of the river, or in the adjacent hills.

Also noteworthy is the role of technology in opening up opportunities for a society. Consider the Netherlands and how its history has been formed by the technical problem of a populous society dealing with too much water, as an inexorably rising sea threatens their landscape; or the case of communities in Colorado trying to deal with too little water for farmers and domestic users, by bringing their supply over a mountain chain.

These and others cases included in the book, provide evidence of the successes, near misses and outright failures that mark our ongoing relationship with landscape throughout the history of Homo sapiens. The hope is that compilations such as this will lead to a better understanding of the issue and provide us with knowledge valuable in planning a sustainable modus vivendi between humanity and landscape for as long as possible.

Audience: The book will interest geomorphologists, geologists, geographers, archaeologists, anthropologists, ecologists, environmentalists, historians and others in the academic world. Practically, planners and managers interested in landscape/environmental conditions will find interest in these pages, and more generally the increasingly large body of opinion in the general public, with concerns about Planet Earth, will find much to inform their opinions.

Extra material: The color plate section is available at http://extras.springer.com

“The editors of this book compile a multidisciplinary collection of case studies that examine human and environment relationships over different time periods, and focus particularly on how adaptive behaviors change in response to environmental change. … Landscapes and Societies would be a valuable book for students and scholars who want to better understand the processes of societal and landscape change through an integrative analysis of the physical environment and human activities over time.” (Kimberly E. Medley, Landscape Ecology, Vol. 27, 2012)