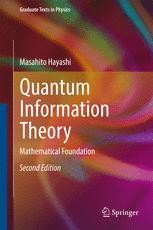 This graduate textbook provides a unified view of quantum information theory. Clearly explaining the necessary mathematical basis, it merges key topics from both information-theoretic and quantum- mechanical viewpoints and provides  lucid explanations of the basic results. Thanks to this unified approach, it makes accessible such advanced topics in quantum communication as quantum teleportation, superdense coding, quantum state transmission (quantum error-correction) and quantum encryption.
Since the publication of the preceding book Quantum Information: An Introduction, there have been tremendous strides in the field of quantum information. In particular, the following topics – all of which are addressed here – made seen major advances: quantum state discrimination, quantum channel capacity, bipartite and multipartite entanglement, security analysis on quantum communication, reverse Shannon theorem and uncertainty relation.
With regard to the analysis of quantum security, the present book employs an improved method for the evaluation of leaked information and identifies a remarkable relation between quantum security and quantum coherence. Taken together, these two improvements allow a better analysis of quantum state transmission. In addition, various types of the newly discovered uncertainty relation are explained.
Presenting a wealth of new developments, the book introduces readers to the latest advances and challenges in quantum information.
To aid in understanding, each chapter is accompanied by a set of exercises and solutions.

He worked in Kyoto University as a Research Fellow of the Japan Society of the Promotion of Science (JSPS) from 1998 to 2000, and worked in the Laboratory for Mathematical Neuroscience, Brain Science Institute, RIKEN from 2000 to 2003, and worked in ERATO Quantum Computation and Information Project, Japan Science and Technology Agency (JST) as the Research Head from 2000 to 2006. He also worked in the Superrobust Computation Project Information Science and Technology Strategic Core (21st Century COE by MEXT) Graduate School of Information Science and Technology, The University of Tokyo as Adjunct Associate Professor from 2004 to 2007. He worked in the Graduate School of Information Sciences, Tohoku University as Associate Professor from 2007 to 2012. In 2012, he joined the Graduate School of Mathematics, Nagoya University as Professor. He also worked in Centre for Quantum Technologies, National University of Singapore as Visiting Research Associate Professor from 2009 to 2012 and as Visiting Research Professor from 2012 to now. In 2011, he received the Information Theory Society Paper Award (2011) for Information-Spectrum Approach to Second-Order Coding Rate in Channel Coding. In 2016, he received the Japan Academy Medal from the Japan Academy and the JSPS Prize from Japan Society for the Promotion of Science.