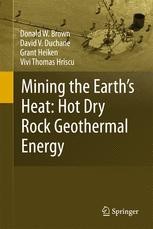 Mining the Earth's Heat: Hot Dry Rock Geothermal Energy describes the work carried out by the Los Alamos National Laboratory to turn an idealistic concept - that of drawing useful amounts of energy from the vast underground store of hot rock at reachable depths - into a practical reality. This book provides comprehensive documentation of the over two decades of experiments carried out at the test site at Fenton Hill, New Mexico, where the feasibility of accessing and extracting this vast natural resource was finally demonstrated. It also discusses the numerous technical, administrative, and financial hurdles that had to be overcome along the way. This publication will no doubt prove invaluable to researchers around the world as they strive to move this now-proven technology toward commercial viability. In addition, it is a valuable source of relevant information for anyone interested in the world energy outlook for the 21st century and beyond.

Donald W. Brown was instrumental in the establishment, in 1971, of the very successful

in New Mexico. He directed the early geological and geophysical reconnaissance work

in the Jemez Mountains, directed the drilling and testing program in the first deep exploratory

well, and in late 1973 selected Fenton Hill (36 km west of Los Alamos) as the Laboratory's

HDR Test Site. Don was the HDR Project Manager through the difficult period from 1983 to

1985, when the deeper (4000-m) reservoir at Fenton Hill was first created by hydraulic

stimulation and then tested as a closed-loop circulating system. He subsequently served

as the lead reservoir engineer for the HDR Project from 1992 through 1995, a time that covers

the successful flow testing of the deeper HDR reservoir at Fenton Hill.