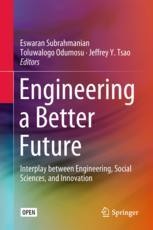 This open access book examines how the social sciences can be integrated into the praxis of engineering and science, presenting unique perspectives on the interplay between engineering and social science. Motivated by the report by the Commission on Humanities and Social Sciences of the American Association of Arts and Sciences, which emphasizes the importance of social sciences and Humanities in technical fields, the essays and papers collected in this book were presented at the NSF-funded workshop ‘Engineering a Better Future: Interplay between Engineering, Social Sciences and Innovation’, which brought together a singular collection of people, topics and disciplines. The book is split into three parts:

A. Meeting at the Middle: Challenges to educating at the boundaries covers experiments in combining engineering education and the social sciences;

B. Engineers Shaping Human Affairs: Investigating the interaction between social sciences and engineering, including the cult of innovation, politics of engineering, engineering design and future of societies; and

C. Engineering the Engineers: Investigates thinking about design  with papers on the art and science of science and engineering  practice.

Dr. Eswaran Subrahmanian is a Research Professor at the Institute for Complex engineered systems and the Engineering and Public Policy  at Carnegie Mellon University. He is a Visiting Honorary Professor at the International Institute of Information Technology.He has held several positions including Visiting Professorship at Technology, Policy Management faculty at TU_Delft, Netherlands and University of Lyon II, France and Guest Researcher, National Institute of Standards and Technology, USA. His research is in the areas of Socio-technical systems design, Decision support systems Engineering informatics, Design theory and methods and engineering design education. He has worked on several R&D projects designing design processes and collaborative work support systems with Asea Brown Boveri, Alcoa, Bombardier, Boeing, and Robert Bosch.  He has also been involved in the National Health Information Systems Project, Digital Archive for Engineering Information, and the Role of Standards for Product Life-Cycle Management in the USA.  He has been a consultant to a number of organizations including ABB, Bosch, Lytix, and the World Bank.  He is a Distinguished scientist of the Association of Computing Machinery and Fellow of the American Association of Advancement of Science.

Jeffery Tsao is currently a Distinguished Member of Technical Staff at Sandia National Laboratories.  His work involves integrated science, technology and economic modeling in Solid-State Lighting and other areas.  He is also exploring embedded-network models of the evolution of social knowledge – an emerging approach to the field of “evolutionary epistemology.” During 2009-2014, Jeff served as Chief Scientist of Sandia’s Energy Frontier Research Center for Solid-State-Lighting Science. During 2000-2001 Jeff served as vice-president of R&D at E2O Communications, Inc., a U.S.-based pre-IPO fiber communications components company.  During 1993-2000, he served as manager of various technical groups at Sandia National Laboratories in the area of compound semiconductor materials and devices.Jeff has authored or co-authored over 100 publications, holds 9 U.S. patents. He was elected Fellow of the American Physical Society in 1996, and Fellow of the American Association for the Advancement of Science in 2008

Dr. Tolu Odumosu is Assistant Professor at the Schoolof engineering and applied sciences at the University of Virginia. He is an STS scholar who studies technological systems as historically and culturally situated socio-technical systems. Odumosu’s first book, “Cycles of Invention and Discovery” (Harvard University Press, October 2016) examines the Science and Technology enterprise in the United States and shows how standardized categories of “basic” and “applied” research have become a hindrance. The book grew out of his examination of research cultures at Bell Laboratories while working on telecommunication systems and communication standards in Africa and the United States. He is currently working on a monograph of mobile telephony systems in Nigeria showing how their design and consequent development reflect the contingencies of Nigerian engineers and the practices of their users. He is also building the Digital Privacy Research Laboratory at SEAS.