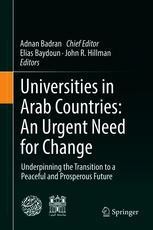 Universities in Arab Countries: An Urgent Need for Change

Underpinning the Transition to a Peaceful and Prosperous Future

This book provides an overview of the current state of universities in the Arab world, and how they have the potential to transform society to raise the quality of life and stimulate wealth. The main themes progress from general to the specific.  Each chapter providing an overview followed by factual analysis and options for the way forward.

All of the major challenges facing universities in general are addressed with reference to issues of particular importance in the Arab Region. The challenges faced include: the need to accommodate a social model of life-long learning; the desire for institutional autonomy while interacting with governments; the availability of open-access online courses and distance learning.

Arab universities are diverse, ranging from those entirely state-controlled and funded, to wholly independent private universities. The quality of governmental oversight is also variable, and some institutions are clearly unworthy of the appellation ‘university’.

The book comprises of 20 chapters authored by senior academics with a wide international experience and a commitment to assisting the improvement of Arab higher educational and research communities.

John Hillman
Professor Hillman, Director and Chief Executive of the Scottish Crop Research Institute (SCRI) during 1986-2005, oversaw the incorporation of the Scottish Agricultural Statistics Service (later retitled Biomathematics and Statistics Scotland – BioSS), staff transfers from the Macaulay Institute for Soil Research, links with the University of Dundee, establishment of Mylnefield Research Services Ltd, new buildings, expansion of staff numbers, and major revision of the research portfolio. Prior to his appointment at SCRI, he was Professor and Head of the Department of Botany, University of Glasgow.

In the period 1995-1997, he was Chairman of the UK Technology Foresight Sector Panel on Agriculture, Natural Resources and Environment and then the Agriculture, Horticulture and Forestry Sector Panel. During 2000-2005, he was a member of the Board of Directors of the BioIndustry Association and chairman of its Industrial Biotechnology Group. Other positions held include President of the Agriculture and Food Section of the British Association; member of Court of the University of Abertay Dundee; visiting professorships in the Universities of Dundee, Edinburgh, and Strathclyde; editor and referee for several scientific journals; various committees of the Royal Society of Edinburgh; and member of the Scottish Funding Council Research and Knowledge Transfer Committee.  He is scientific advisor to various organisations including the Arab Academy of Sciences.