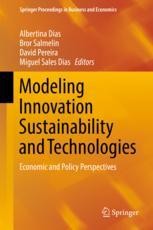 This book gathers a diverse range of novel research on modeling innovation policies for sustainable economic development, based on a selection of papers from a conference on modeling innovation systems and technologies (MIST). It aims at encouraging interdisciplinary and comparative approaches, bringing together researchers and professionals interested in sustainable economic, technological development and open innovation, as well as their dissemination and practical application.

The respective contributions explore a variety of topics and cases, including regional innovation policy, the effects of open innovation on firms, innovation and sustainability in tourism, and the use of information and communication technologies. All chapters share a strong focus on new research and innovation methodologies, in keeping with the Experimentation and Application Research (EAR) and Open Innovation 2.0 principles.
Show all
About the authors

Albertina Dias holds a PhD in Economics, a Master in Statistics and Information Management and a Degree in Economics from the Nova University of Lisbon. She is a Chairman and CEO of the MIST association in Lisbon, and a Professor in the Department of Business at the New Atlantic University, among other academic positions.Albertina has been working actively in the knowledge triangle having run her own company on innovative ICT between 2005-2013 (SbH, Ltd., developing multimedia interactive books, based on augmented reality technology and computer aided eBook interaction systems). In the past she has assumed several levels of responsibilities in companies such as Paulo Branco Holding (CEO, film industries), Oracle (Financial Analyst), Allianz (Financial Analysis), and Cap Gemini (Project Manager). Under the Program Equal e-Change (EU funded) she has participated since 2005 in the presentation, demonstration and validation of innovative products in the areas of flexible security on employment and audiovisual and multimedia tools. She was responsible for the audiobook library of the Economists’ College in PT and has produced several economic audiobooks. Since 2008 she is an independent expert for the European Commission, acting as a reviewer/evaluator for the implementation of indirect actions under specific programmes. Since 2005, she is a fellow researcher of GITICE/Universidad de Huelva in Spain (scientific domain of Economics and research line of ICT) where she works on innovative tools towards regional economic development.
Bror Salmelin: Born in 1956, professional career in technology and innovation policy since 1978. First in the newly established Finnish Technology agency responsible for ICT and automation investments and policy, then 1997-1998 as Vice Consul in Los Angeles responsible for ICT and media industry liaison, and from 1998 at the European Commission as head of unit and later as advisor on innovation system&s. Core competencies in systems and modelling, technology and innovation policy, driver for Open Innovation 2.0 paradigm for digital sustainable innovation.
David Pereira: holds a BSc in Civil Engineering (1979) MSc in Sanitary Engineer (1982) and PhD in optimisation in environmental engineering (1989). He built a career in both academia and industry, as a researcher and professor in the Environmental Engineering Department of the Faculty of Sciences and Technology of the New University of Lisbon, and as partner of a consulting engineering conglomerate and an environmental sustainability company. He coordinates Portuguese research project and collaborated in European R&D ones. As a practical consultant, he has coordinated more than 150 projectsof medium or large size  in Portugal  and abroad. His core competencies include water, wastewater and solid waste systems modelling (simulation and optimisation), technology application in real life (water/wastewater transport and treatment, solid waste management), and technical and economic planning of those systems.
José Miguel Sales Dias holds a BSc (1985) and MSc (1988) in Electrical and Computer Engineering (IST-UTL, Portugal) and a PhD (1998) in Computer Graphics and Multimedia from ISCTE-IUL, Portugal. He currently holds an Invited Associated Professor position, teaching and conducting research in Computer Graphics, Virtual and Augmented reality, Ambient Assisted Living and Human-Computer Interaction (HCI). He coordinates the Digital Living Spaces group of ISTAR-IUL, an R&D unit of ISCTE-IUL (http://istar.iscte-iul.pt/index.php/Digital_Living_Spaces). From early 2017, he holds a position as a member of the Board of Directors of ADENE, the Portuguese Energy Agency. He was Director of the first European R&D Centre in Speech and natural HCI technologies of Microsoft Corporation, in Portugal (Microsoft Language Devdiv>elopment Center, MLDC). He is a regularly R&D project evaluator and reviewer for the European Commission and Portuguese Ministry of Economy. He is author of 1 patent, author, co-author or editor of 11 scientific books or journal editions, 12 indexed papers in international journals, 26 chapters in indexed international books, 144 other publications, workshops or keynotes in international conferences. Since 1992 participated or participates in 33 International R&D projects (ESPRIT, RACE, ACTS, TELEMATICS, TEN-IBC, EUREKA, INTERREG, FP5 IST-IPS, FP6 IST, ESA, Marie Curie, AAL, ACP), and 15 Portuguese (FCT, QREN, NITEC, POSC, POCTI, POSI, ICPME, TIT). Obtained 5 scientific prizes. Member of ACM SIGGRAPH, Eurographics, ISCA and IEEE; editorial boards of several journals; several Program Committees of National and International conferences in Computer Graphics, Virtual and Augmented Reality, Speech technologies, Accessibility and Ambient Assisted Living. Past President of ADETTI, an ISCTE-IUL R&D research center. Past Vice-president of the Portuguese Group of Computer Graphics, Eurographics Portuguese Chapter.

“The book is useful for graduate and undergraduate students and academic researchers as it contains detailed information about the concept of innovation and its applications in different disciplines to generate research ideas. This book can likewise facilitate government officials and executives of different organizations in applying innovative concepts and practices to different industries. The book is comprehensible as each part has a distinct theme and each chapter analyzes the topic in a straightforward manner.” (Sunny Sun and Rob Law, Information Technology & Tourism, Vol. 20, 2018)​