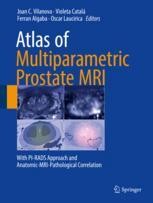 With PI-RADS Approach and Anatomic-MRI-Pathological Correlation

This atlas provides a comprehensive, state of the art review of the use of multiparametric MRI (mpMRI) for the imaging of prostate cancer, covering aspects from diagnosis and loco-regional staging through to the role of the technique after treatment and follow-up. The book contains a wealth of high-resolution images, many of them in color, and displays the anatomical-MRI–pathological correlation whenever appropriate. Readers will find a helpful overview on the current standardized method for reading and reporting on mpMRI, the Prostate Imaging Reporting and Data System (PI-RADS), version 2. Dedicated chapters focus on differential diagnosis and imaging pitfalls, and the inclusion of helpful diagrams and algorithms will further assist in image interpretation, enabling readers to ease and improve their use of mpMRI. Edited and written by very experienced radiologists, pathologists, and urologists; the Atlas of Multiparametric Prostate MRI will serve as a unique source of clinically relevant information and an aid to disease management for radiologists, urologists, pathologists, radiotherapists, and oncologists.

Joan C. Vilanova is Chairman of the Department of Magnetic Resonance in Clinica Girona, Senior Consultant in the Institute of Diagnostic Imaging (IDI) of the Catalan Institute of Health, and Assistant Professor of Radiology at the University of Girona, Girona, Spain. He obtained his PhD in 2008 on MRI of prostate cancer and works as a radiologist. He has authored more than 100 journal articles, and has also edited 8 radiology books and contributed to 22 books. He has participated in 30 projects funded by research grants. In 2008, Dr. Vilanova received an award for research on prostate MRI from the Spanish Society of Radiology. He has also received 31 scientific awards at national and international conferences and a professional recognition award from the College of Physicians for his work on prostate MRI. He was director for the 4th European course on prostate MRI and President of the Spanish Radiological Congress in 2018.

Violeta Catalá is a radiologist specializing in urological pathology who is currently a staff member in the Radiology and Interventional Department, Fundació Puigvert, Barcelona. She also teaches the Master's Degree in Clinical Andrology at the Autonomous University of Barcelona, Spain. Dr. Catalá developed her doctoral thesis at the Hospital Clinic of Barcelona and obtained her PhD in 2013. She has obtained 13 scientific awards at national and international congresses. Dr. Catalá has published chapters in specialized books and has participated in many publications in peerreviewed radiological and urological journals. At present, she is developing her research projects in the field of multiparametric MRI and prostate cancer.

Ferran Algaba is pathologist. MD for Universitat Autónoma de Barcelona (UAB) (1974), PhD ( UAB ) (1982). Head of the Pathology Unit of the Fundació Puigvert . UAB professor. WHO Advisory for classifications of urogenital tumors  2004 and 2016. Member of urological EAU guidelines. Member of the ISUP, SEAP and ESP. He has published 236 articles refered on PubMed , Editor of 4 books and author of 46 chapters of uropathology

Oscar Laucirica is urologist. He is specialist in uro-oncology and uro-gynecology. Coordinator of the Unit of surgical laparoscopy of the Department of Urology in the Hospital Moises Broggi, Barcelona. Dr. Laucirica recevided several awards on national and international urological meetings and congresses. He has published several           books and atlas on urological and prostatic anatomy. He has developed several trademarks and patents concerning several surgical urological devices.

“This book on multiparametric magnetic resonance imaging of the prostate uses excellent and abundant color illustrations and figures to present the fundamentals for developing a successful mpMRI prostate program. … The book is specifically geared to radiologists or other experts interested in starting or improving their protocol for imaging the prostate. … This is a must have for those developing or wishing to improve their prostate MRI program. It is mostly geared for those with an understanding of MR imaging.” (James R. Mark, Doody's Book Reviews, January, 2018)