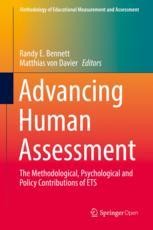 This book describes the extensive contributions made toward the advancement of human assessment by scientists from one of the world’s leading research institutions, Educational Testing Service. The book’s four major sections detail research and development in measurement and statistics, education policy analysis and evaluation, scientific psychology, and validity. Many of the developments presented have become de-facto standards in educational and psychological measurement, including in item response theory (IRT), linking and equating, differential item functioning (DIF), and educational surveys like the National Assessment of Educational Progress (NAEP), the Programme of international Student Assessment (PISA), the Progress of International Reading Literacy Study (PIRLS) and the Trends in Mathematics and Science Study (TIMSS). In addition to its comprehensive coverage of contributions to the theory and methodology of educational and psychological measurement and statistics, the book gives significant attention to ETS work in cognitive, personality, developmental, and social psychology, and to education policy analysis and program evaluation. The chapter authors are long-standing experts who provide broad coverage and thoughtful insights that build upon decades of experience in research and best practices for measurement, evaluation, scientific psychology, and education policy analysis. Opening with a chapter on the genesis of ETS and closing with a synthesis of the enormously diverse set of contributions made over its 70-year history, the book is a useful resource for all interested in the improvement of human assessment.

Randy E. Bennett is Norman O. Frederiksen Chair in Assessment Innovation in the Research & Development Division at Educational Testing Service in Princeton, New Jersey. Bennett's work has focused on integrating advances in cognitive science, technology, and educational measurement to create approaches to assessment that have positive impact on teaching and learning. From 1999 through 2005, he directed the NAEP Technology Based Assessment project, which included the first administration of computer-based performance assessments with nationally representative samples of school students, and the first use of "clickstream,” or logfile, data in such samples to measure the processes used in problem solving. From 2007 to 2016, he directed an integrated research initiative titled, Cognitively Based Assessment of, for, and as Learning (CBAL®), which focused on creating theory-based summative and formative assessment intended to model good teaching and l

earning practice. Randy Bennett is president of the International Association for Educational Assessment (IAEA) (2016-), an organization primarily constituted of governmental and nongovernmental nonprofit measurement organizations throughout the world, and president of the National Council on Measurement in Education (NCME) (2017-2018), whose members are individuals employed primarily in universities, testing organizations, state education departments, and school districts. He is a Fellow of the American Educational Research Association.

Matthias von Davier is Distinguished Research Scientist at the National Board of Medical Examiners (NBME), in Philadelphia, Pennsylvania. Until 2016, he was a senior research director in the Research & Development Division at Educational Testing Service (ETS), and co-director of the center for Global Assessment at ETS, leading psychometric research and operations of the center. He earned his Ph.D. at the University of Kiel, Ger

many, in 1996, specializing in psychometrics. In the Center for Advanced Assessment at NBME, he works on psychometric methodologies for analyzing data from technology-based high-stakes assessments. He is one of the editors of the Springer journal Large Scale Assessments in Education, which is jointly published by the International Association for the Evaluation of Educational Achievement (IEA) and ETS. He is also editor-in-chief of the British Journal of Mathematical and Statistical Psychology (BJMSP), and co-editor of the Springer book series Methodology of Educational Measurement and Assessment. Dr. von Davier received the 2006 ETS Research Scientist award and the 2012 NCME Brad Hanson Award for contributions to educational measurement. His areas of expertise includes topics such as item response theory, latent class analysis, diagnostic classification models, and, more broadly, classification and mixture distribution models, computational statistics, person-fit, item-fit, and model checking, hierarchical extension of models for categorical data analysis, and the analytical methodologies used in large scale educational surveys.
Show all