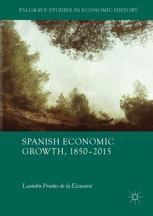 This text offers a comprehensive and nuanced view of the economic development of Spain since 1850. It provides a new set of historical GDP estimates for Spain from the demand and supply sides, and presents a reconstruction of production and expenditure series for the century prior to the introduction of modern national accounts. The author splices available national accounts sets over the period 1958–2015 through interpolation, as an alternative to conventional retropolation. The resulting national accounts series are linked to the historical estimates providing yearly series for GDP and its components since 1850. On the basis of new population estimates, the author derives GDP per head, decomposed into labour productivity and the amount of work per person, and placed into international perspective.

Open Access has been made possible thanks to Fundación Rafael del Pino's generous support.

You can find the full dataset here: http://espacioinvestiga.org/bbdd-chne/?lang=en

‘This book stands among the classics for the Kuznetian paradigm in empirical economics. This is the definitive study of Spain's transition to a modern economy.’

‘The definitive account of Spanish economic growth since 1850, based firmly on a magisterial reconstruction of that country’s national accounts and an unrivalled knowledge of both Spanish and global economic history of the period.’

Leandro Prados de la Escosura is Professor of Economic History at Carlos III University in Madrid, Spain, and Honorary Maddison Chair in the Faculty of Economics and Business, at the University of Groningen, the Netherlands. He is also Research Fellow at the Centre for Economic Policy Research (CEPR), UK, Research Associate at the Centre for Competitive Advantage in the Global Economy (CAGE), UK, and Corresponding Fellow of the Royal Academy of History, Spain. He has published articles and books on long-run growth and retardation in Spain, the economic consequences of Latin American independence, the costs and benefits of European Imperialism, and British Exceptionalism at the time of the Industrial Revolution.