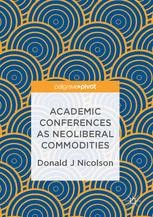 Dr Donald J Nicolson worked in academic research for 13 years and was a Post-Doctoral Research Fellow. He is currently a freelance writer. His works have been published in the likes of the British Medical Journal, Health Technology Assessment, The Cochrane Library, The Scotsman, and London School of Economics Impact Blog.

“This is fluently written—an interesting read and also the first substantive treatment of this topic with a decent body of relevant literature reviewed to support it. The innovations in style and structure are really refreshing and I hope to see more from Nicolson in future.” (Kevin Morrell, Management Learning, April, 2017)

“Nicolson’s book Academic Conferences as Neoliberal Commodities provides an exploratory study into conferences in the social sciences, looking explicitly at the link between conferences and the neoliberalism of academia itself. … is highly recommended to anyone working within the social sciences who aspires to make the most out of this unexplored yet integral part of performing and producing academia.” (Fawzia Haeri Mazanderani, LSE Review of Books, blogs.lse.ac.uk, April, 2017)

“This is definitely and deliberately an unconventional book... Nicolson has certainly made the most of a novel format to create something that is original, and this license also allows him to carry out work with the care and passion of genuine and sustained intellectual curiosity, rather than having to follow - perhaps narrower - academic strictures. Overall, there is a lot in the book that is clever and it seems a kind of cleverness that reflects a natural intelligence which is not stilted or formulaic.” (Kevin Morrell, Professor of Strategy, Warwick Business School, UK)

“Have you ever wondered if academic conferences are worth the expense and hassle they cause to those organising and attending them? If so, you’ll find Donald Nicholson’s thoughtful analysis of conferences as ‘neoliberal commodities’ of interest. He shows that conferences are competitive market places for the commodification of 21st century academia’s products.” (Sir Iain Chalmers, Coordinator, James Lind Initiative, Oxford)

“In this highly insightful book, Donald Nicolson subjects to much-needed scrutiny an aspect of the academic life that this is often enjoyed or endured, but rarely attracts the attention it merits: the conference. Drawing on his own experience as a delegate and presenter, as well as on an impressive range of other interviews, Nicolson reflects on the uses and usefulness of conferences: for the disciplines with which they engage; for the researchers who attend them; and for society at large. The academic conference is understood as both experience and commodity. It is a form of travel (with everything that entails), as well as a marketplace in which ideas, values and reputations are traded. The book will serve as a provocative keynote lecture, designed to trigger further conversations in its wake.” (Charles Forsdick, James Barrow Professor of French, University of Liverpool, UK, and AHRC Theme Leadership Fellow for “Translating Cultures”)