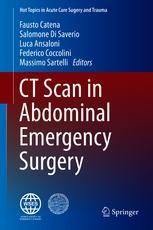 This book focuses on the diagnostic impact of CT scans in severe abdominal trauma and in non-traumatic acute abdomen, the two clinical entities that constitute the main reasons for referrals for this imaging technique from the intensive care unit. The concept behind it  is that emergency surgeons and physicians not only need the clinical knowledge to manage the different pathological conditions, but that they must also have a full understanding of diagnostic imaging modalities.

To this end, each chapter includes a description of a specific acute abdominal disorder. In addition to the clinical presentation and the diagnosis and management guidelines, there is a special focus on imaging studies with clear and concise descriptions, high-quality images and the evolution grading scale to aid interpretation.

This easy-to-read book is an ideal source of practical information for acute care surgeons, radiologists and for all the members of the emergency team.
Show all
About the authors

Fausto Catena MD, PhD, FRCS is currently Chief of Emergency Surgery Department, Parma University Hospital, Italy. Until 2011, he worked as Consultant General Surgeon at the Dept. of General, Emergency and Transplant Surgery of the St Orsola-Malpighi University Hospital, Bologna, Italy. He is Editor in Chief of the World Journal of Emergency Surgery, former Editor of European Surgical Research, Editor of the Open Cardiovascular And Thoracic Surgery Journal, the World Journal of Gastroenterology and many other top ranking journals as well as a Member of the Committee on Publication Ethics. He is General Secretary of the World Society of Emergency Surgery, and past President of the ESYS of the European College of Surgeons.

Luca Ansaloni, MD is currently director of the General, Emergency and Trauma Surgery Dept. of Bufalini Hospital in Cesena (Italy) and Professor at the  Milan University’s General and Emergency Surgery Residency  School. He has extensive experience in managing post-traumatic and non-post-traumatic open abdomen patients, and as a war surgeon in Africa and Afghanistan. He has authored hundreds of scientific articles and book chapters. He is past- president of the World Society of Emergency Surgery (WSES).

Massimo Sartelli, MD, is currently a surgeon at the General Surgery department of the Hospital of Macerata, under the direction of Pr. Ivo Patrizi. He mainly performs liver surgery, gastro-intestinal surgery, colon surgery, vascular surgery, both minimally invasively and thoracoscopically. He has coauthored over 71 scientific publications.

“The book is well-written, clearly laid out and the illustrations are of good quality and reasonably comprehensive … this is a nicely produced and written book that I am happy to recommend to junior surgeons and radiologists in training as an easy-to-read primer, and also to more experienced radiologists who may be unfamiliar with the evolving changes in clinical care.” (Daniel Boxer, RAD Magazine, April, 2019)