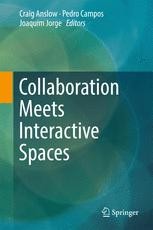 This book explores the technological advances and social interactions between interactive spaces, surfaces and devices, aiming to provide new insights into emerging social protocols that arise from the experimentation and long-term usage of interactive surfaces.

This edited volume brings together researchers from around the world who investigate interactive surfaces and interaction techniques within large displays, wearable devices, software development, security and emergency management.  Providing both theory and practical case studies, the authors look at current developments and challenges into 3D visualization, large surfaces, the interplay of mobile phone devices and large displays, wearable systems and head mounted displays (HMD’S), remote proxemics and interactive wall displays and how these can be employed throughout the home and work spaces.

Collaboration Meets Interactive Spaces is both for researchers and industry practitioners, providing readers with a coherent narrative into the current state-of-the-art within interactive surfaces and pervasive display technology, providing necessary tools and techniques as interactive media increasingly permeates everyday contexts.

Pedro Campos is an Assistant Professor at the University of Madeira, Portugal, where he also serves as PhD Program Director for Computer Engineering. He is a former Vice President of the Madeira Interactive Technologies institute and Associate Researcher at the Visualization and Intelligent Multimodal Interfaces Group at INESC-ID Lisbon. He is a founding member of IFIP’s Technical Committee 13.6 on Human Work Interaction Design, elected as Chair for 2014-2017. He is also Portugal’s national representative at TC13 and serves the editorial board and program committee of several Human-Computer Interaction journals and conferences. He has authored more than sixty research papers and has lead or participated in several EU, national and regionally-funded scientific projects.

Joaquim Jorge received his PhD from Rensselaer Polytechnic Institute in 1995, is Full Professor of Computer Graphics and Multimedia at Instituto Superior Técnico, Universidade de Lisboa and coordinates the VIMMI research group at INESC-ID. He is Editor-in-Chief of the Computers and Graphics Journal (Elsevier), a Fellow of the Eurographics Association and Senior Member of ACM and IEEE, serves on the ACM Europe Council and Chairs the ACM/SIGGGRAPH Specialized Conferences Committee. He organized 35+ international scientific events, was Eurographics 2016 papers co-chair, served on 180+ program committees and (co)authored 290+ publications in international peer-refereed venues. His research interests include multimodal user interfaces, 3D Visualization and modeling.