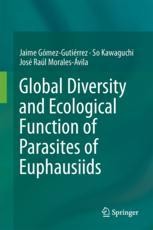 Global Diversity and Ecological Function of Parasites of Euphausiids

This volume critically reviews all previously published work of parasites that interact with krill (order Euphausiacea) updating misconceptions and summarizing the diversity of epibionts, ectoparasites, mesoparasites and endoparasites that interact with these crustaceans. As far as we know, there is a lack of books about parasites of marine crustaceans not targeted to fisheries and aquaculture. Thus, this would be the most complete and integrative monograph of parasites of marine zooplankton and micro nektonic organisms worldwide. Krill form immense aggregations and serve as food for multiple planktonic and nektonic predators playing a crucial role in pelagic food web. Besides, several species are also used for human consumption. For these reasons there is a growing concern about the health issues that krill parasites may impose on other species, including us. This book provides a comprehensive review of parasites of a crustacean order that can extrapolate to potential parasites in other crustacean taxa worldwide.

Jaime Gómez-Gutiérrez is a marine biologist interested to study secondary productivity, biomass, behavior, ecology, parasite-host and predator-prey interactions of animals in the epipelagic marine ecosystem.  He has a major on Marine Biology from the University of Baja California Sur, Mexico (1985-1989), a MSc degree from the Interdisciplinary Center of Marine Sciences, Plankton and Ecology Department, La Paz, BCS (1990-1992) and a PhD in Biological Oceanography from Oregon State University, USA (1998-2003). Since 1990 he has been studying biology and ecology of the crustaceans of the Order Euphausiacea (krill) in every possible perspective (embryology, vital rates, ecology) because they are relevant trophic links in the food web.

So Kawaguchi is a Senior Research Scientist at the Australian Antarctic Division (AAD), and manages the AAD Krill Research Program. His current research interest is biology and ecology of Antarctic krill, as well as application of commercial krill fishery information to krill management. So has a Major (1982-85) and a PhD (1986-90) on Fisheries Science from Hokkaido University. From 1990 to 1994 he worked at the Central Research Laboratory of Nippon Suisan Kaisha Ltd. and from 1994 to 2002 at the National Research Institute of Far Seas Fisheries of the Japanese Fishing Agency. Since December 2002, he joined Australian Antarctic Division, and is now responsible for managing the Krill Biology Ecology & Acoustic Group. So continues his involvement in the work of CCAMLR, particularly in relation to development of management procedures for the krill fishery.

José Raúl Morales-Avila is currently a PhD student at CICIMAR-IPN, La Paz BCS Mexico (2012-2015). His current research interest is ecology and genetic of endoparasites from invertebrates to vertebrates hosts. He attended Marine Ecology (1996-2001) and studied brackish water fish parasites. He got a Master in Sciences (2005) at CICIMAR-IPN majoring marine resources management working with molecular and cytogenetic characterization of crustacean anacostracean populations.