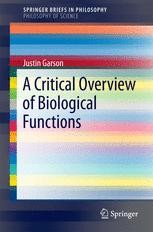 A Critical Overview of Biological Functions

This book is a critical survey of and guidebook to the literature on biological functions. It ties in with current debates and developments, and at the same time, it looks back on the state of discourse in naturalized teleology prior to the 1970s. It also presents three significant new proposals. First, it describes the generalized selected effects theory, which is one version of the selected effects theory, maintaining that the function of a trait consists in the activity that led to its differential persistence or reproduction in a population, and not merely its differential reproduction. Secondly, it advances “within-discipline pluralism” (as opposed to between-discipline pluralism) a new form of function pluralism, which emphasizes the coexistence of function concepts within diverse biological sub-disciplines. Lastly, it provides a critical assessment of recent alternatives to the selected effects theory of function, namely, the weak etiological theory and the systems-theoretic theory. The book argues that, to the extent that functions purport to offer causal explanations for the existence of a trait, there are no viable alternatives to the selected effects view.

Justin Garson is an assistant professor of philosophy at Hunter College-CUNY. He has authored or co-authored dozens articles in the philosophy of science, the history of neuroscience and medicine, and biodiversity conservation. His first book, The Biological Mind: A Philosophical Introduction, shows how philosophical reflection on biology is crucial for solving long-standing puzzles of the human mind. He is also an editor of the forthcoming Routledge Handbook of the Philosophy of Biodiversity.

“The author provides an impressive and concise review of the debate on the various accounts of functions that are held by recent and current philosophers. … this book should be very helpful as a reference map of the accounts defended in current literature and as an introduction to the field. … We advise it mostly for a philosophical readership, as a map of the field.” (Maël Montévil, Science and Education, Vol. 26, 2017)