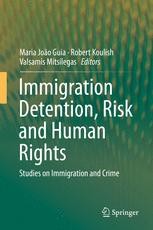 Studies on Immigration and Crime

In recent years, International Law and European Law have converged to develop measures for combatting irregular immigration. Some of them include the criminalization of illegally entering a member state or illegally remaining there after legally entering. Though migration has become a great challenge for policymakers, legislators and society as a whole, we must never forget that migrants should enjoy the same human rights and legal protection as everyone else.

Maria João Guia is a PhD (summa cum laude) in Law, Justice and Citizenship at the XXIst century at the University of Coimbra, Portugal and author of the thesis "Immigration, 'Crimmigration' and violent crime. The convicted inmates and the representations of Immigration and Crime". She is Associate Researcher at the Centre of Human Rights, at the Faculty of Law, University of Coimbra. Her most recent edited book, The Illegal Business of Human Trafficking (Springer, 2015). Maria was appointed in 2012 as a SYLFF Fellow for her leadership and organisational skills and was (until dec 2015)  independent external expert of the European Commission on the area of Security, Freedom and Justice and currently director of CINETS (www.crimmigrationcontrol.com).

Robert Koulish, Ph.D. is Director of MLAW Programs, undergraduate law programming at the University of Maryland in the College of Behavioural and Social Sciences, Joel J. Feller Research Professor of Government and Politics, at the University of Maryland, College Park, MD 20742. He is Lecturer at Law at UMD Carey School of Law. He is the author of Immigration and American Democracy: Subverting the Rule of Law (2010), and academic and law review articles, book chapters and op/ed columns about crimmigration, detention, immigration privatization and risk. website: mlaw.umd.edu

Valsamis Mitsilegas is Professor of European Criminal Law, Director of the Criminal

Justice Centre and Head of the Department of Law at Queen Mary University of London. He is Co-coordinator of the European Criminal Law Academic Network (ECLAN) and a member of the Commission's Expert Group on European Criminal Policy. From 2001 to 2005 he served as legal adviser to the House of Lords European Union Committee. He is the author of four monographs and over 80 articles in the fields of European, economic and transnational criminal law, immigration and asylum law and the relationship between security and human rights, in particular the right to privacy. His latest book is The Criminalisation of Migration in Europe (Springer, 2015).
Show all
Reviews

“This volume will be of interest to anyone concerned with the topic of immigration detention in Europe and the US. Indeed, recent developments lend a particular topicality to this issue.” (Alan Desmond, Nordic Journal of Migration Research, Vol.8 (1), 2018)