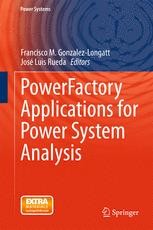 This book presents a comprehensive set of guidelines and applications of DIgSILENT PowerFactory, an advanced power system simulation software package, for different types of power systems studies. Written by specialists in the field, it combines expertise and years of experience in the use of DIgSILENT PowerFactory with a deep understanding of power systems analysis. These complementary approaches therefore provide a fresh perspective on how to model, simulate and analyse power systems. It presents methodological approaches for modelling of system components, including both classical and non-conventional devices used in generation, transmission and distribution systems, discussing relevant assumptions and implications on performance assessment. This background is complemented with several guidelines for advanced use of DSL and DPL languages as well as for interfacing with other software packages, which is of great value for creating and performing different types of steady-state and dynamic performance simulation analysis. All employed test case studies are provided as supporting material to the reader to ease recreation of all examples presented in the book as well as to facilitate their use in other cases related to planning and operation studies. Providing an invaluable resource for the formal instruction of power system undergraduate/postgraduate students, this book is also a useful reference for engineers working in power system operation and planning.

He is Vice-President of Venezuelan Wind Energy Association, Senior Member of the IEEE, member of The Institution of Engineering and Technology - The IET (UK) and member of International Council on Large Electric Systems -CIGRE. His research interest includes innovative (operation/control) schemes to optimize the performance of future energy systems.

José Luis Rueda Torres was born on March 26th, 1980 in Ecuador. In August 2004, he received the Electrical Engineer diploma from Escuela Politécnica Nacional, Quito, Ecuador, with cum laude honors. From September 2003 till February 2005, he worked in Ecuador, in the fields of industrial control systems and electrical distribution networks operation and planning. In November 2009, he received the Ph.D. degree from the National University of San Juan, obtaining the highest mark Sobresaliente (Outstanding). He has been with the Institute of Electrical Engineering at University Duisburg-Essen as postdoctoral research associate since August 2009. Dr. Rueda will join the staff of the Department of Electrical Sustainable Energy at Delft University of Technology as Assistant Professor of Intelligent Electrical Power Grids from March 2014.