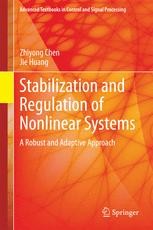 Stabilization and Regulation of Nonlinear Systems

A Robust and Adaptive Approach

The core of this textbook is a systematic and self-contained treatment of the nonlinear stabilization and output regulation problems. Its coverage embraces both fundamental concepts and advanced research outcomes and includes many numerical and practical examples. Several classes of important uncertain nonlinear systems are discussed. The state-of-the art solution presented uses robust and adaptive control design ideas in an integrated approach which demonstrates connections between global stabilization and global output regulation allowing both to be treated as stabilization problems.

Stabilization and Regulation of Nonlinear Systems takes advantage of rich new results to give students up-to-date instruction in the central design problems of nonlinear control, problems which are a driving force behind the furtherance of modern control theory and its application. The diversity of systems in which stabilization and output regulation become significant concerns in the mathematical formulation of practical control solutions—whether in disturbance rejection in flying vehicles or synchronization of Lorenz systems with harmonic systems—makes the text relevant to readers from a wide variety of backgrounds. Many exercises are provided to facilitate study and solutions are freely available to instructors via a download from springerextras.com.

Striking a balance between rigorous mathematical treatment and engineering practicality, Stabilization and Regulation

of Nonlinear Systems is an ideal text for graduate students from many engineering and applied-mathematical disciplines seeking a contemporary course in nonlinear control. Practitioners and academic theorists will also find this book a useful reference on recent thinking in this field.
Show all
About the authors

Zhiyong Chen studied Automatic Control at the University of Science and Technology of China from 1995 to 2000 and was awarded the B. Eng degree in 2000. He was awarded the M.Phil and Ph.D. degrees from the Department of Mechanical and Automation Engineering, The Chinese University of Hong Kong both in the area of systems and control and in 2002 and 2005, respectively. He was a Research Associate with the University of Virginia from 2005 to 2006 and is currently a Senior Lecture with the University of Newcastle, Australia. His research area is mainly nonlinear control theory and applications. He received the China State Natural Science Award, Class II, in 2010, the best paper award of the Eighth International Conference on Control, Automation, Robotics and Vision in 2004, the best paper awards of the Eighth and the Tenth World Congress on Intelligent Control and Automation in 2010 and 2012. He is/was associate editor of IEEE Transactions on Automatic Control, Systems and Control Letters and several other journals.

Jie Huang studied Power Engineering at Fuzhou University from 1977 to 1979 and Circuits and Systems at Nanjing University of Science and Technology (NUST) from 1979 to 1982. He got his Master's degree from NUST in 1982 and was a faculty member there from 1982 to 1986. He completed his Ph.D. study in automatic control at the Johns Hopkins University in 1990 and subsequently held a post-doctoral fellowship there until July 1991. From August 1991 to July 1995,

he worked in industry in the USA. In September 1995, he joined the Department of Mechanical and Automation Engineering at the Chinese University of Hong Kong and is now a professor and chairman there. He served as a Science Advisor to the Leisure and Cultural Services Department of Hong Kong Special Administrative Region, and Honorary Advisor to Hong Kong Science Museum. His research interests include control theory and applications, robotics and automation, systems biology and guidance and control of flight vehicles. He has authored two books and numerous papers. He received the China State Natural Science Award, Class II, in 2010, the Croucher Senior Research Fellowship award in 2006, and the best paper award of the Eighth International Conference on Control, Automation, Robotics and Vision in 2004. He is a CAA Fellow, IFAC Fellow and IEEE Fellow.

“The book focuses on two design problems for nonlinear continuous-time control systems, namely stabilization and output regulation. … The book is useful for both researchers and for use in graduate courses in control engineering.” (Tibor Takács, Mathematical Reviews, August, 2015)