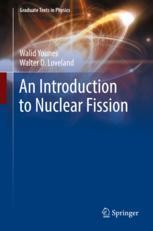 An Introduction to Nuclear Fission

This hands-on textbook introduces physics and nuclear engineering students to the experimental and theoretical aspects of fission physics for research and applications through worked examples and problem sets. The study of nuclear fission is currently undergoing a renaissance. Recent advances in the field create the opportunity to develop more reliable models of fission predictability and to supply measurements and data to critical applications including nuclear energy, national security and counter-proliferation, and medical isotope production. An Introduction to Nuclear Fission provides foundational knowledge for the next generation of researchers to contribute to nuclear fission physics.

Walid Younes received his Ph.D. in nuclear physics from Rutgers University in 1996, and joined the experimental nuclear physics group at the Lawrence Livermore National Laboratory soon after.  For the next ten years, he worked principally on the measurement and interpretation of fission cross sections from neutron-induced reactions.  In 2006, he made the transition to nuclear theory, studying the quantum many-body problem and its application to describe the nuclear fission process.  In addition to numerous publications and presentations on the physics of fission, Dr. Younes co-authored Microscopic Theory of Nuclear Fission in Springer’s “Lecture Notes in Physics” series in 2019.  He has lectured in summer schools and in the nuclear engineering department at the University of California Berkeley on nuclear physics and fission, where he designed and taught a full-semester course on the physics of fission.  Dr. Younes retired from LLNL in 2019, but maintains an active interest in understanding the fission process through measurements and modelling.

Walter D. Loveland is Professor at the department of Chemistry of the Oregon State University, US. He received his PhD in Nuclear Chemistry from the University of Washington after obtaining the SB in Chemistry from MIT. He held postdoctoral positions in Argonne and Oregon State Universities, becoming a faculty member at Oregon State University in 1968. He spent some periods at LBNL, Uppsala, and Argonne as visiting scientist. Prof. Loveland has worked on various aspects of nuclear chemistry, such as the study of heavy ion induced reactions, fast neutron induced fission, environmental chemistry and nuclear chemistry education.  He is the author of several nuclear chemistry textbooks.  He has published more than 250 scientific articles in the open, refereed literature, given 62 talks at APS meetings, and over 300 talks at professional meetings. He is NSF Sigma Xi (Washington), Tartar, ACS, and AAAS fellow. He was awarded the Sigma Xi Award for Research, Gillfillan award, Beaver Champion Award (Oregon State), and G.T. Seaborg Award.