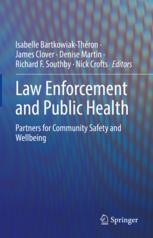 Partners for Community Safety and Wellbeing

The expanding remit of policing as a fundamental part of the public health continuum is increasingly acknowledged on the international scene. Similarly the growing role of health professionals as brokers of public safety means that the need for scholarly resources for developing knowledge and broadening theoretical positioning and questioning is becoming urgent and crucial. The fields of law enforcement and public health are beginning to understand the inextricable links between public safety and public health and the need to shift policies and practices towards more integrated practices. This book comes as a first, an utterly timely scholarly collection that brings together the views of multidisciplinary commentators on a wide range of issues and disciplines within the law enforcement and public health (LEPH) arena. The book addresses the more conceptual aspects of the relationship as well as more applied fields of collaboration, and the authors describe and analyze a range of service delivery examples taken from real-life instances of partnerships in action. Among the topics covered:

Law Enforcement and Public Health: Partners for Community Safety and Wellbeing is essential reading for a wide array of professions and areas of expertise in the intersectoral field of LEPH. It is an indispensable resource for public health and law enforcement specialists (practitioners, educators, scholars, and researchers) and training programs across the world, as well as individuals interested in developing their knowledge and capacity to respond to complex LEPH issues in the field, including public prosecutors, coroners, and the judiciary. The text also can be used for undergraduate and postgraduate university policing, criminology, sociology, psychology, social work, public health, and medicine programs.
Show all
About the authors

Dr. Isabelle Bartkowiak-Théron, PhD, (University of Tasmania, Australia) specialises in socio-legal studies, with a particular interest in police interaction with vulnerable people. She is the lead senior researcher on the vulnerability, police education, and law enforcement and public health research streams at the Tasmanian Institute of Law Enforcement Studies. In her teaching capacity, she coordinates the Tasmania Police Recruit Course for the University, within which she teaches on police interactions with vulnerable people and the related legislation. An award winning educator, she is the recipient of University of Tasmania Teaching Excellence Medal. Within the Global Law Enforcement and Public Health Association, Isabelle heads up the Education Special Interest Group, and sits on the First Responders Mental Health Special Interest Group, as well as the Prosecutors Group. She has been the deputy chair of the Tasmanian Social Science Human Research Ethics Committee since 2018. She occasionally consults on the UNODC on vulnerability matters and international curricula. Isabelle sits on various international journal editorial committees, and on international and Australian charitable, professional and research governance boards, such as Connect42 (a Tasmanian charity that aims to promote literacy as a public health issue), the Australian Institute of Police Management Ethical Review and Research Governance Advisory Committee, and the Australia New Zealand Society of Criminology. She sits on the Australian Crime Prevention Council as the executive member for Tasmania, and on the Tasmanian Sentencing Advisory Council. She has two amazingly wonderful children, and is often seen with knitting needles in hand.

Staff Sergeant James Clover, MPA, has been responsible for a variety of roles in policing including undercover operations, gangs, high-risk offender assessment and management, training, hate crime investigations, and combating human trafficking and sexual exploitation. He has represented Canadian police education and training in his previous roles as a National Advisory to Police Training and the Chair for the implementation of the National Police Training Inventory. He has conducted research and provided consultation to several countries, including Tampa Florida (2014) and Melbourne Australia (2012).  In 2018, James was awarded the 2018 International Policing Award from the Canadian Association of Chiefs of Police.  James was named a Police Fellow with the Global Law Enforcement and Public Health Association in 2020.  Since 2015, he has instructed within the Department of Public Safety & Justice Studies, Faculty of Health and Community Studies at MacEwan University in Edmonton, Alberta, Canada. It is not uncommon to see James working at his desk with one or two pugs sitting on his lap.

Denise Martin, PhD, is a Professor of Criminology at the University of Abertay in the city of Dundee, Scotland. She has had a long career as a researcher in the field of Criminal Justice and her work has involved working with vulnerable groups and practitioners across a range of issues. Her interests are primarily around partnership working and examining ways to effectively support communities resolve issues around crime and anti-social behaviour. She also has a strong interest in learning and education in the field of criminal Justice specifically leadership and organizational change. She has worked on projects focusing on alternatives to custody for young offenders (with the Children’s Society), understanding the experience of school aged children’s crime victimization and evaluating coaching for women offenders.  Professor Martin has also been awarded funding from a variety of organizations, including the Scottish Prison Service for a project of prison officer professionalization, the Home Office to examine emergency service collaboration and Police Scotland to evaluate a National Crime Unit established to Investigate Child Abuse cases and an evaluation of the Prevention First initiative, to introduce a preventative approach to tackling local community issues like anti-social behaviour and violence.  She has published a number of articles and edited two books, one on Crimes, Schools and Anti-Social Behaviour (Hayden and Martin 2011, Palgrave Macmillan) and one on Police Research (Introduction to Police Research; Taking Lessons from Practice, Brunger, Tong and Martin (2015)).  She has been the Associate Director for the Education and Leadership Network for the Scottish Institute of Research since November 2016.  She is a member of the Law Enforcement and Public Health Special Interest Group for Education.

Dr. Richard F. Southby, PhD, is Executive Dean and Distinguished Professor of Global Health Emeritus, Milken Institute School of Public Health, The George Washington University, Washington, DC, USA.  Prior to joining The George Washington University in 1979, he was Senior Lecturer in Social and Preventive Medicine at Monash University, and Director of Health Services Research and Teaching, School of Public Health and Tropical Medicine at The University of Sydney, Australia.  In 1975 he was seconded to be Full-Time Commissioner on the Australian Hospitals and Health Services Commission in Canberra.  He is currently an Honorary Professor in the Faculties of Medicine at The University of Melbourne, Monash University and The University of Sydney.  Since 1984 he has been Director of the Interagency Institute for Federal Health Leaders, which is the major continuing professional development program for senior health professionals from the US Army, US Navy, US Air Force, US Public Health Service and the Department of Veterans Affairs.  Since 1989 he has been a member of the Metropolitan Police Department Reserve Corps, Washington, DC, rising to the rank of Commander and serving as Commanding Officer.  He is Senior Educational Adviser to the Metropolitan Police Department.

Professor Nick Crofts, AM MB BS, MPH, FAFPHM, is an epidemiologist and public health practitioner who has been working in the fields of HIV/AIDS, illicit drugs, harm reduction and law enforcement for over 30 years. His major epidemiological work has been on the control of HIV and hepatitis C among injecting drug users in Australia (for which he received an NHMRC Senior Research Fellowship) and globally, including almost every country in Asia, for which he received the International Rolleston Award from the International Harm Reduction Association in 1998, and was made a Member of the Order of Australia in 2018. He was at the Burnet Institute for Medical Research and Public Health for 19 years, where he was instrumental in building its Public and International Health arms, and was Deputy Director for five years. He was Director of Turning Point Alcohol and Drug Centre for three years, and then at the Nossal Institute for Global Health for three years. He was Visiting Senior Research Fellow at the UN Interregional Crime and Justice Research Institute in Turin in 2012, and is currently a Senior Expert at the International Development Law Organization in The Hague, resident in Amsterdam. He has been a member of Australia’s National Council on AIDS three times, and has performed multiple consultancies for WHO, UNAIDS, UNODC, AusAID and other bilateral and multilateral agencies. As a designer and technical director of AusAID’s flagship HIV/AIDS program in Asia, ARHP 2002-2007, he was instrumental in building capacity among SE Asian police forces in relation to HIV, and has worked in many settings forging relationships between police and public health. Through the Centre for Law Enforcement and Public Health, of which he is founding Director, he founded the Law Enforcement and HIV Network (LEAHN) in 2009, convenes the International Working Group on Policing Marginalised Communities, and is Director of the annual Law Enforcement and Public Health Conferences (LEPH2019, Edinburgh, October 2019) from which the Global Law Enforcement and Public Health Association has grown. He is married to his best friend, Kerri, and has four remarkable young women as daughters.